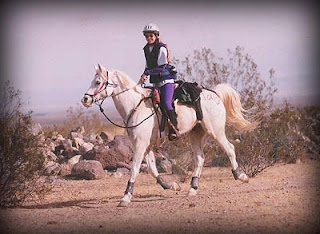 
He was a beautiful brilliant white bundle of energy floating above the tan sand, in the golden winter light, a happy horse in the Panamint Valley. - Me, Death Valley Encounter, 2004

He could sneer like nobody's business while motoring down the trail, intimidating the horse next to him with his fearsome attitude. 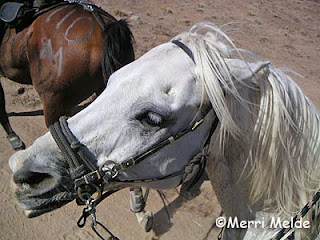 And well he should - not many could hold a candle up to this invincible endurance horse that is 5th on the all-time AERC mileage list with 13,200 miles, and who was gracious enough to carry 19 of us on his back throughout his 15-year career.

He was bred and born destined for the show ring but through a series of fateful twists, he started his life as a pack horse named Paco, before ending up where he was meant to be: on the endurance trails. Jim and Jackie Bumgardner renamed him Taco and started his endurance training before selling him to Bob and Julie Suhr. The rest is endurance history.**

Julie renamed him Zayante. "We put him in a corral overlooking Zayante Canyon, named after an Indian tribe that once inhabited it," Julie said. "Taco let out this gigantic bugle call to tell everyone he was here and he had a new name as of that moment." For five seasons, Bob and Julie owned and rode their Superhorse, who went 5000 miles without a pull – that’s 89 straight rides, on distances of 50 to 100 miles, including 4 straight Tevis finishes, 42 Top Ten finishes, and 5 Best Condition awards. "He's the best horse I've ever ridden," Julie still says, and coming from someone who has over 30,000 endurance miles and finished the Tevis Cup 22 times and won the Haggin cup 3 times, that's saying something.

In 1995 the Suhrs sold Zayante back to Jackie Bumgardner, because he could be quite the spooky horse. Jackie and Zayante continued on Julie’s original quest to reach 100 rides without a pull. Not only did they accomplish this; in Zayante’s 100th ride, the Gambler’s Special in April of 1996, Zay and Jackie finished in first place. 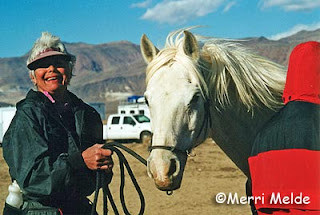 I stepped in around 2001. I rode for Jackie in the winters in Ridgecrest, California, and there were a number of us vying for Most Coveted (Saddle) Seat of Affection in the Zayante Fan Club. Zayante ultimately willingly carried me over 715 AERC miles.

One of the best endurance horses I've ever ridden, Zayante gave me some of my greatest and most memorable rides on some of the most spectacular trails.

It was great to be riding a white horse in the desert at midnight; there was still a bright moon glow from the low clouds, I was quite warm, my horse was still going strong, and I was so fortunate to be out here, spending a day and a night with a super equine companion.

Zayante didn’t look or feel like he’d been 92 miles – like I certainly did – and he perkily trotted right on out for the last 8 miles. He was still pulling, jigging, ears pricked forward, neck a bundle of energy beneath me. This horse blows me away. I myself was worn, tired, aching, but I could not complain because of this horse who would faithfully and much more willingly than I continue another 50 miles if need be. The wind was blowing a gale at our backs. My tongue was thick and heavy, voice was gone, throat dry and raw, but I couldn’t be bothered to make the effort of reaching for a handy water bottle to take a drink.

The last few miles seemed to take the longest of all until we made the last turn to the north. The lights of the Fairgrounds could be seen in the distance. At 99 ½ miles, at 2:30 in the morning, Zayante gave me a special gift: he spooked so hard (at nothing) I almost hit the sand! Just testing to see if I could stay on after all that riding. What a great, great horse he is!

I rode and finished my first multi-day ride on him at the Death Valley Encounter in California in 2004:

We wound on up through a pinyon forest, ensconced in its permanent blanket of snow for the winter. We reached Rogers Pass at 6560 feet, and it wasn’t the strong cold wind up there that almost blew me off Zayante, but the stunning view into Death Valley and the Badwater Basin (below sea level), and the jumble of Black Mountains and the Amargosa Range and Greenwater Range. Climbing the last steep hill, we could also see the Owlshead Mountains covering the southern horizon. Now I knew why Zayante wanted to get up this canyon so badly - he knew what was waiting here on top.

Down, down, step by step beside this amazing horse I’d ridden and walked beside for 195 miles, sometimes stepping in rhythm with, sometimes moving on auto pilot with, legs stepping one after the other, on and on, with 2 goals in mind: getting to the finish line and starting the next day. Just me and this horse, taking me up mountains and canyons and valleys I’d never see otherwise, with a power and speed I could never attain, this amazing 18 to 23-year-old steed, now approaching his 10,685th career mile.

We finished just before dark, and passed the final vet check. I got my wish, completing my first multi-day ride on the best endurance horse I have ever ridden. 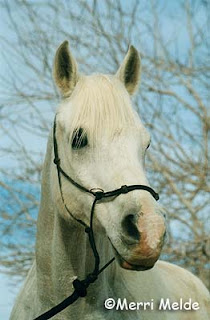 There are two more very special unpublished stories about Zayante that will be featured in my upcoming memoir. I hope they will do him justice. 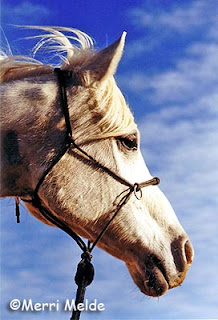 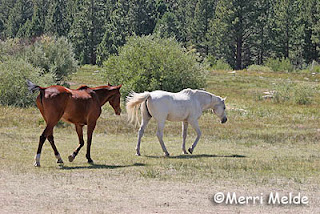 Zayante then went to live at Nick and Judy's in the Bay Area - Nick being the president of the Zayante Fan Club, with several thousand miles of trail together. There Zayante continued to live the good life - forever revered, constantly spoiled. 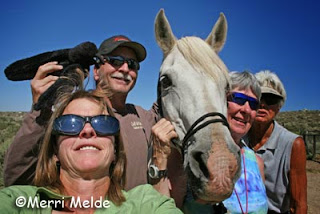 Just a few of Zayante's Fan Club - including The Raven!

Nothing stopped Zayante on the trails, but colic finally stopped him Tuesday night. He's gone to join Ross now, where I'm quite sure they are already galloping circles around the other endurance horses up there.

Zayante, you took our hearts with you when you left us. You will be forever missed.


**Zayante was featured in a story I wrote about him in Equus magazine in 2004, before he reached his 10,000 miles. Read about it here. 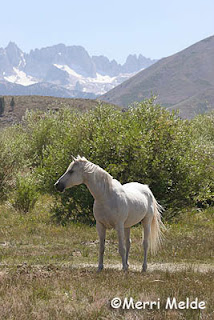 Posted by The Equestrian Vagabond at 7:48 AM