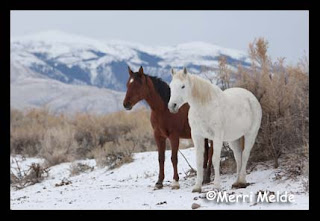 Through my open window, the soft sound of swishing snowflakes woke me in the night - our first real Owyhee snowfall of the winter! Half asleep, half giddy, I could not wait for daylight to come, to step out into a white winter blanket. The snort of a horse drifted on the still night. Ahh - what better sounds than snow falling at night and the comforting snort of the neighbor's horses?

And where there was one, there would be more - horses escaped from their paddock!

Amazing how quickly one can wake when there's Horse Trouble in the dark. I sprang out of bed, threw on clothes and coat, grabbed hat and gloves, and carefully stepped outside so as not to startle anyone. A black horse snorted again at me, and walked by me. I thought it was Smoky. There were indeed other forms out there, dark ones and and gray ones floating ghost-like above the white ground blanket - they were not supposed to be out here - how/where/when did they escape?? I could see a lot of dark prints in the snow - they'd been out here a while. 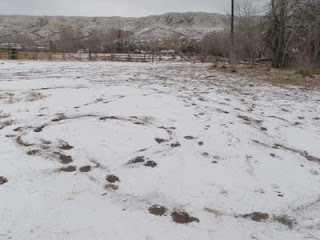 I came back around to where the loose horses were scattered - Finneas made a beeline toward me and the feed tub in my hands - and I lured them all into Judy's (empty) pasture. Seven horses - half the herd! - and not the usual suspects (Jose and Mac). In fact, in this half-herd, I was looking at baby Luna and no mama Perry! No sign or sound of the other half of the herd.

With opening and closing other gates and calling the strays, I led them into the small back pen, and reunited them with the rest of the herd, who was waiting along a fence in the big back pen. Then the whinnying started, the 'Hey there you are!' 'Where did you guys go?' and 'Mama! Oh now I realize I missed you! I'm so hungry!' calls.

Later in the morning, the neighbor emailed to say that the escaped horses had been over there - helped themselves to the hay there. Another neighbor later said she'd driven in before dawn and saw hoof prints on the road, and thought somebody was out riding awful early. 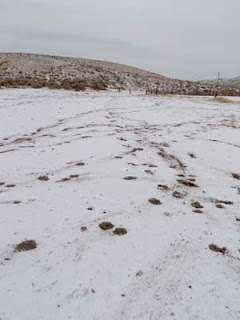 I spent half the day checking the fences (none down) and gates (none left open), looking for tracks, (couldn't tell where the snow tracks came from - they must have escaped before the snow started?) trying to figure out how/why only half the herd escaped, each scenario less likely than the next. A horse opened a gate with his teeth and closed it behind him and 6 other horses? 7 horses jumped a fence? 7 horses stepped under or stepped over a (not hot) electric fence, without leaving hoof prints, without a one getting tangled, including Rhett who wouldn't get near a white tape fence if there was a mountain of grain on the other side of it? One of us humans sleep-walked and let half the herd out? Magic?

The horses spent the rest of the day passed out in a sand pile and sleeping on their feet.

Their Big Night Out  was exhausting. 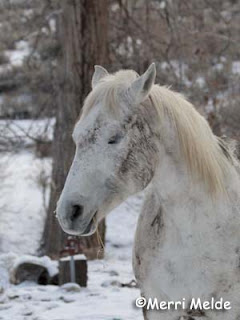 Posted by The Equestrian Vagabond at 9:32 AM