If you want to feel a little like a wimp, ride for 50 miles beside a guy in shorts and tank top when you've got 4 layers on and your hands are numb. However, he will wear extra clothing once in a while: "I'm getting older and sometimes get cold at rides so I have to wear gloves." Once in a while he might wear a sweatshirt, and there is one photo known to exist of him wearing actual jeans on a horse, though none of us have ever seen this extraoardinary phenomenon in person.

If you want to feel humbled, ride 50 miles beside one who has ridden 50,000 AERC miles. (He's second on the high mileage list.) Riding with Hall of Fame endurance rider Dave Rabe is a bit humbling, but it's also enjoyable. It's also nice to watch his handsome white gelding move down the trail. Dave and 10-year-old White Cloud have racked up over 4500 miles together, in just 3 seasons of endurance riding. "He's a nice horse. He's been very sound."

But it wasn't always easy riding White Cloud. The horse had been dropped off at an animal sanctuary 4 years ago, and when the woman there tried riding him, he dumped her. She gave the horse to Dave. It took Dave a few times of getting run away with and dumped before he figured White Cloud out. It's usually when he mounts White Cloud that he bolts and runs. "Last time he dumped me at a ride was Death Valley over a year ago...." Amazing what wet saddle blankets can do for a horse that nobody else could ride, although White Cloud still has that bolting trigger inside him.

Dave is known for riding difficult horses and turning them into good competitors. Dave made the AERC Hall of Fame in 2009, and when accepting his award, he said, "I suppose I really like a horse that bucks and runs away with me. That’s why people give me their horses.” Dave is also known for going out of his way to help at rides. He'll arrive at a ride a few days early to mark trail, and he'll stay afterward to unmark trail. If you need any help applying easyboot glue-ons or gloves, or fixing your tack, or repairing your truck or trailer, he'll do that before a ride, or during a ride when most of the rest of us are sitting down to eat lunch. 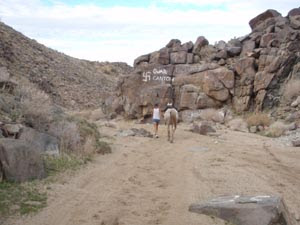 Gretchen and I rode her two horses Spice and Kav with Dave and White Cloud on the 32nd annual Fire Mountain ride. We survived attack jackrabbits (just ask Kav and White Cloud about those), and a jeep with a dubious driver in Nazi Canyon. (For some reason, the driver had decided to attempt to drive over a 4 foot high boulder. It didn't work.) 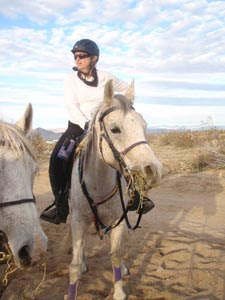 The Fire Mountain ride was almost called off the week before due to low entries. When 38 signed up, the ride was declared on; ultimately about 75 riders took off into the desert sunrise on Saturday morning, the boulders and cholla glowing golden and our long shadows stretching toward the pink Sierra Nevada mountains. 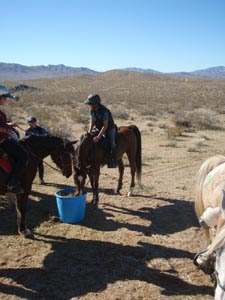 The Farthest Traveler Award went to Amada Rayner from West Australia. She and her husband Jared were coming to the US on vacation and she wondered if she might fit in an endurance ride. Finding the Fire Mountain ride on the schedule, she contacted ride manager Sue Benson, who put her in touch with local Jackie Bumgardner, who offered her home-bred Fire Mt Odyssey to ride. Amanda was all smiles during and after the ride - Amanda's first US endurance ride and completion. Amanda is not the first foreigner to be carried to a finish by Fire Mt Odyssey. The 14-year-old mare carried Japanese ride Hiromi KItake to a Tevis finish in 2007. Often this ride is done in near-gale force winds, but Saturday had only the slightest pleasant breeze with temperatures in the mid-70's - unless you hit that long climb on Loop 3 around 2 PM. Then you were wishing for some of the "W" word. Not a single puff of air disturbed the sun beating down on our winter-coated horses on that sheltered climb. By the time we got to the top of the hill, the horses thought they'd died and crawled through Death Valley in the middle of summer. The water trough was almost empty at the bottom of the hill, but since we could see Mike Montgomery coming with a refill in the water truck, we used the rest of it in the tank to douse our hot horses. We let them rest and eat hay a while to recover there; and at the same time, a nice cloud cover took over the sky, enough to make me pull my sleeves down and for Dave Rabe to put his tank top back on his bare back (though he said "It's so I don't sunburn.") The Fire Mountain ride isn't an easy one - we finished in about 8 hours, and we had moved along all day. We measured exactly 50 miles on our GPS, and each loop had some fair climbing up into the Rademacher hills, and our horses all had minimal winter clips. But all the loops had great footing, awesome views - and great company. Next time you're doing a ride out West, try tagging along with a Hall of Famer. You might feel a little insignificant... but if Dave Rabe's the Hall of Famer, you'll be glad you did. Posted by The Equestrian Vagabond at 12:19 PM