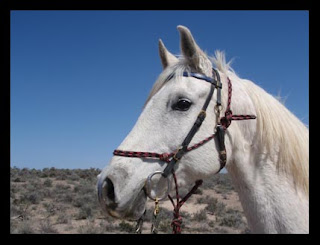 He's seen ATVs zooming around, but he must not have come across motorcycles before, at least not on the trail.

Carol and I were headed back on the flats after a loop on the Bilbo Baggins trail. I thought I heard motorcycles up ahead - which is amazing, since I can't hear well anyway, and I ride with a bandanna over my ears for warmth and to keep out the bugs.

Sure enough, a minute later, about half a dozen motorcycles popped up out of a wash a quarter mile away, heading towards us. We stopped; Carol got off. I stayed on Mac because I thought he might be okay. The bikers saw us and actually stopped (wow!), turned off their motors (wowow! thanks guys!), and gestured to us to come on.

I rode Mac toward them, and Carol led Suz behind me... but as we got closer, Mac's head got higher and his eyes got wider, and he started to get very very light on his feet like a cat - his Ready-For-Flight mode.

Ohmigod! Funny things! Shiny things! With moving things on them! They resembled humans and sounded like humans, but they couldn't be humans!

I dismounted and led Mac. He followed behind me, eyes still wide and nostrils dilating, while we stopped and talked to the bikers. Suz was braver, going right up to a biker to touch his motorcycle. 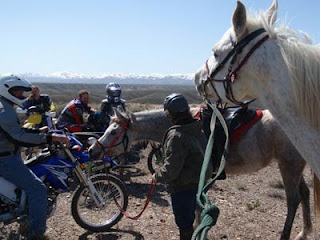 Mac thought it best to stay further back.

We chatted a while, then led our horses away; 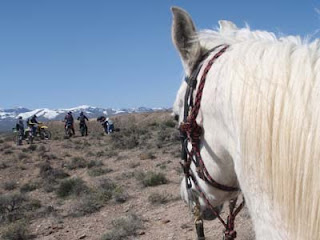 the boys waited till we were ready and they started up their engines.

Oh my! Mac about leaped with all 4 feet in the air behind me, and he was quite alarmed, especially with the nosier motorcycles! (See his expression above.) He was really anxious when some of the things started rolling away! And growling and farting and sputtering! Suz was already calmly following Carol down the trail, but it took Mac a little longer to calm down. Eventually he forgot them and started reaching for grass to eat. 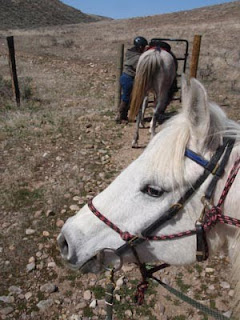 It was a good motorcycle encounter - nothing like a little machine edumication out on the trail. Maybe next time he won't be afraid of them.
Posted by The Equestrian Vagabond at 6:58 PM