Barbed Wire: Bane and Boon of the West 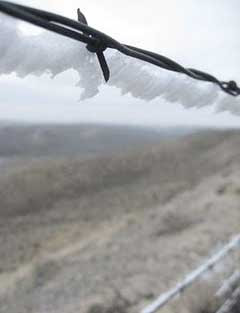 It's such a common sight in the West that it's hardly noticed: barbed wire. It's as much a part of the landscape as the sagebrush and the Owyhee mountains here. It wasn't always so.

Just about in tandem with the Owyhee gold rush in the 1860's, cattle became another source of gold in this region of the Snake River drainage with its rich grasslands.

Cattle were driven up from California and Oregon, and from Texas. Con Shea drove the first thousand-head herd up from Texas to Idaho in 1867, turning them loose here near Oreana for the winter. He found it so profitable he made it an annual excursion, despite the hardships, the rugged terrain, and the risk of Indian attacks.

Cattlemen ruled the rangelands in the 1870's, turning their herds loose around here to graze wherever they could find food; but by the next decade, homesteaders were competing for some of that land.

Brush, wood, and stone fences were impractical and didn't work to hold cattle, and smooth wire didn't keep them in. Wire with barbs on it did. Though he wasn't the first to design a wire with sharp points affixed to it, Joseph Glidden of Illinois in 1874 invented and patented the barbed wire like we see today. 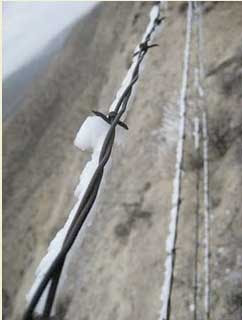 It worked so well that the Fence Cutter Wars erupted between those wanting to keep cattle off their lands (or, not necessarily their lands, but the lands they fenced), and those free-range ranchers who thought their cattle should be allowed to wander and graze at will. Some of the skirmishes became so violent, and ended in enough deaths that fence cutting became a felony in some states.

Since the ubiquitous cattle still roam the West, on private and public lands, the barbed wire still rules. It might not be the best fencing for horses, but then a horse will find a way to kill himself in fencing made of feathers, if he sets his mind to it. Finneas about sliced his hind leg off two winters ago on smooth wire.

It's good hard work to put up barbed wire fences properly - and it's work taking them out. Count on sore hand muscles even if you do have bolt cutters, sore arm muscles from carrying the rolls of barbed wire out,
and count on a permanent scar or two as souvenirs of the wild West. I've got one on my arm from 1998 from opening a cantankerous barbed wire fence gate.

I finally hiked up and pulled out a downed fence up the canyon that has been worrying me for two years now. A stretch of fence was undercut by a deep and newly-widened gully from a flashflood, and part of it was hanging over the edge of the gully and part of it was laying down. If a horse slipped and fell in there through the fence. . . better not to think about it and just get it out of there. I thought normally the horses didn't go up by that fence, but sure enough, as I was working on it, I found a pile of horse poop right by it. I wrestled with the rotted and downed wooden posts and metal T-posts, and wrangled with untangling and rolling up the 4 strands of wire.

I just can't be brought to throw away this genuine Owyhee barbed wire - and though it is thoroughly AGGRAVATING and ANNOYING to work with it, it makes some nice Owyhee Western decorations. 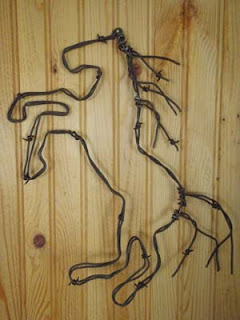 Posted by The Equestrian Vagabond at 12:10 PM