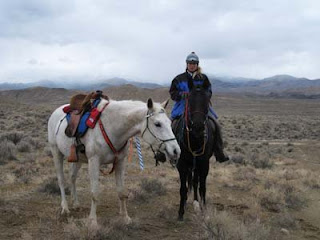 Day and night. Sun and moon. Summer and winter. Revealing what is obscured, and obscuring what is revealed. Cold and tranquil, hot and aggressive.

Finneas and Mac are the Yin and Yang of the Owyhee Riding Spa. They go great together on rides: seemingly opposing forces complimenting and balancing each other out perfectly. Black and white; leader and follower; brave and chicken; aggressive and mellow; vain Pretty Boy Grandson of the Black Stallion, unassuming son of a cow horse.

Finneas must be in front, or he is extremely insulted. Mac must be in back, or he's extremely spooky (any bushes bigger than a bunny - look out!).

When they change positions, their body positions change (and you better hang on! ). When Finny has to go behind Mac, he shakes his head angrily and throws it up and down, with his mouth wide open, tongue over the bit, he lunges forward (and sometimes bucks), and pins his ears back. When Mac's in front, his head flies up like a giraffe, ears pin-pricked forward, eyes popping out of his head, body crouched down and moving forward like a cat, very light on his feet, very hesitant, all nerves and fibers on high alert.

Here's Mac when Finneas is leading - head down and relaxed, ears back. 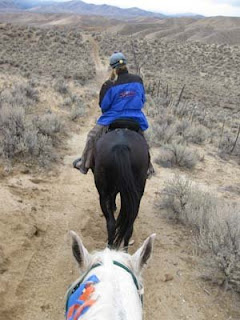 Here's Mac in front, leading the way ("Ooooh look at that scary sagebrush!!!") 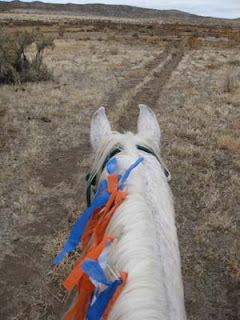 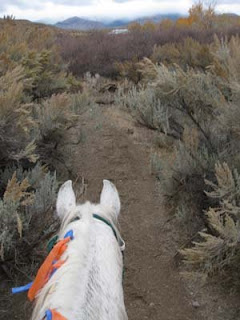 wide eyeballs, ready to leap away from HORSE EATING EVERYTHINGS. 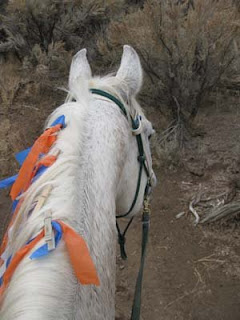 (I missed getting the picture on the trail through the big sagebrush, as, with one hand holding the camera, and my other hand loosely holding the reins, and not paying attention, Mac threw in a huge spook and I almost fell off).

Here's Finneas, when Mac is in front: pissed off, 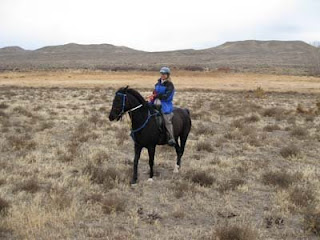 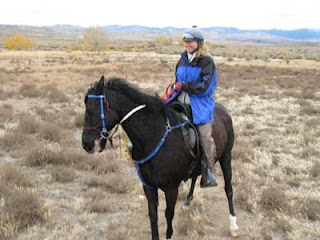 (I missed getting a picture of his lunge and buck and Connie up on his neck.)

Yin and Yang made it home okay after their ride and schooling session. Black horse rolled in the gray sand, white horse had a good roll in the black mud. 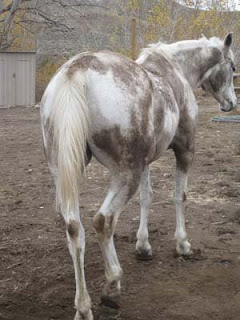 Posted by The Equestrian Vagabond at 8:30 AM