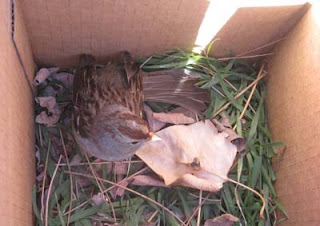 ...is worth good bird karma.

I was walking to the house from a ride, when I noticed Spigot playing with something on the steps. What was it - a ball? stick? rag? He entertains himself with just about anything. He jumped forward, following something, then reached down to put his mouth on it. It was a little bird!

I yelped at him and leaped forward, and scooped up the bird. He didn't resist - was rather motionless, with his eyes already drooping. He'd probably flown into a window and Spigot saw him and picked him up. He was some sort of sparrow.

I didn't see any dog tooth marks on him, but he was probably a goner. Dang - I hate that - a bird dying on my hands. But, I figured I'd at least make him comfortable while he died, so I got a box and lined it with leaves and grass, and put him inside, and put the box in a dark part of the house so the dogs wouldn't get to him. He could still stand, but his eyes were closed.

A while later I was walking by and remembered to look at the bird... and instead of a dead bird, there was this bright-eyed, wild sparrow looking out, and when he saw me - he flew out! Flew straight to the window and smacked into it. Not too hard this time, but he fluttered down onto the sill. I grabbed a shirt and threw it over him, and picked him back up and stuck him in the box, this time leaving it covered with the shirt.

I let him rest another half hour in the dark, then I took the box outside to the creek (while the dogs were otherwise occupied). Took the shirt off the box, and got one quick picture before he flew right out of the box and up into a tree! He'd just stunned himself, all he'd needed was time to rest and recover.

This is my great second dose of Bird Karma for the year, following my Raven rescue in March - yes, I rescued, touched, nursed, cleaned, fed, held, a real Raven (with help from the neighbors), and I think he's still flying around here keeping an eye on me...
Posted by The Equestrian Vagabond at 7:28 PM