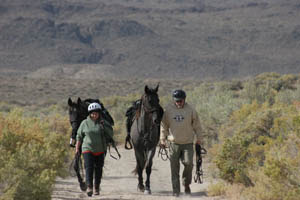 Day 1 was the traditional loop southeast out to Castle Creek Canyon and back for the 50 milers, and a shorter loop in the same direction for the 25 milers. I spent the day helping at the out vet check for the 25 milers. Neighbors Linda and Mike set up with horse trailer, hay, gear bags, hot dogs, and water near an old homestead, 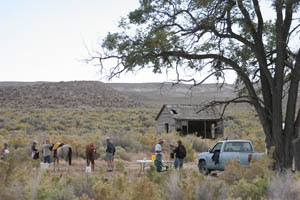 and were then joined by rider-but-not-riding-today Neil, Dr Robert Washington and me. We passed our waiting time by exploring the buildings that were still standing. One was occupied by a screech owl, 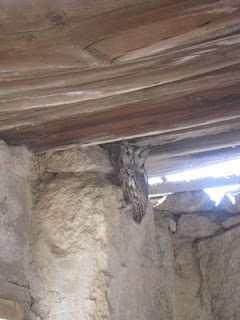 who almost stole Dr Robert Washington's tiny dog off his leash, and who fluffed up to look as big as a great horned owl by the time a few of us peeked in and bothered him. It's probably the busiest he'd ever seen his quiet little spot in the desert.

Excitement on today's trail included a quite deep beaver pond on Castle Creek that riders had to wade through (or jump - hold on!). Steph had warned riders of it at the previous night's ride meeting, saying it was up to her hips when she went through it. "Were you on foot or on your horse!?" Then there was the rogue rattlesnake or two that more than one horse was surprised by and jumped over. 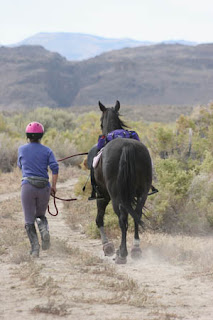 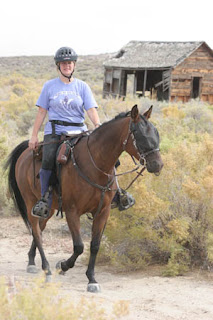 Today's horses and riders represented a good spectrum of the endurance riding pie: the fleet four-footed included Arabians and mustangs and gaited horses and mules. The intrepid riders included the youngest rider - Barrak Blakely, 9 years old and riding with his parents (unfortunately his horse was pulled on the 50 for lameness), and oldest rider - 67 years young Jacinta Denton.

Milestone of the day's ride was Karen Bumgarner, 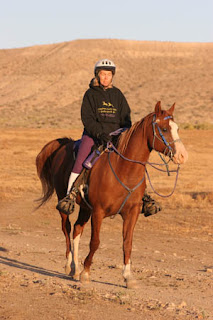 who with today's completion reached her 20,000 mile mark. Today she rode her horse Thunder - yes, the one who dumped her on a training ride last November and ran off and went missing for 6 days and had many worried endurance riders out looking for him. He is looking like a seasoned endurance horse now.

For those of you who don't quite grasp the distance of riding horses for 20,000 miles, that would be like riding from Oreana to Los Angeles to Orlando to New York and back to Oreana. Twice. With a side trip thrown in from Oreana to Anchorage. And back. Plus a ride into Boise. And back.

She received a fitting special award... a little Pokey horse (of Gumby and Pokey fame), and I'll bet she has many more thousands left in her stirrups. 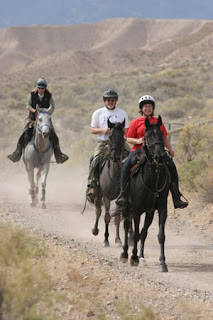 Posted by The Equestrian Vagabond at 4:24 PM