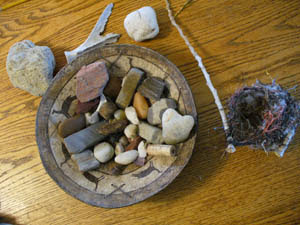 Besides riding every day, it's become written in stone that I must walk the 3 dogs every day. I started it when I got back from Europe last month, Connie took it over when she came to visit (both times), and I've done it since.

Girlie the cow dog and Austin the mixed big round sausage about flip out when I head out the door with my Walk game on, Austin wagging his tail till he about knocks himself over, and Girlie leaping over Austin and spinning 360's in the air. Quincy the semi-senile golden retriever (but improving with exercise) can't go anywhere without carrying a rock. She has to pick out the right rock to take with her, always one that's just a little too big for her mouth. She'll pass several over till she finds the Perfect Rock. We can be hiking up a steep hill, and Quincy can be panting like a dog, can't hardly breathe, but she won't put the rock down. Silly dog has to pick up and carry rocks everywhere.

We usually do some climbing and following ridges. I'd really like to do some more owl hunting - in May I found a long-eared owl 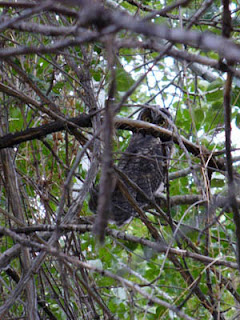 up one of the creeks, trying to snooze during the day - but 3 dogs clattering through rocky creekbeds carpeted with crunchy golden cottonwood leaves sound like a herd of elephants, which encourages any resting owls to abandon their posts long before we get there.

Austin and Girlie are always hunting rabbits; when they spot one, off they go in a frenzied yelping chase. Austin is hopelessly big and slow (once a rabbit doubled back on him within a few seconds, and he continued on up the steep hill, yelping frantically and running crazily till he almost passed out), and Girlie is ALMOST fast enough to catch a rabbit, leaping like a graceful gazelle over the big sagebrush. Quincy just cruises steadily along with her silly rock she picked up.

Well... I guess I pick up rocks too. I've always been a rock collector, leaving a trail of cool rocks behind everywhere I've lived. I used to carry cool big rocks in my truck cab, until a woman told the story one day of rolling her truck and getting slammed in the head with a coffee cup. After that I put my rocks in back in the camper shell.

I can't help but pick up rocks here in Owyhee county also. Cool shapes or colors or breed (what's the word for 'breed' in rock terminology?). It's hard to find a perfectly round, or egg-shaped, or square, or rectangular rock. I found one perfect smoky quartz crystal, but Carol said one of the neighbors goes around planting those everywhere. I was a bit skeptical of that until one day not far from there I came across an actual machine-polished rock. Oh well, I still a found treasure!

Other treasures: I found a small worn deer antler one day, and Jose the horse came across a nice 4-point antler on a ride. There's a few owl pellets from under a light pole that a great-horned owl sits on some nights. And today - what fell out of the tree right in front of the house, but a perfect bird nest! 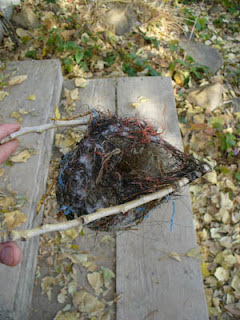 About the size of a softball, it looks like a perfectly knitted and woven bag, made of black and white horse hair, straw, baling twine - taken apart into individual strands - leaf stems, dried oat grass stems, and some sort of stuffing (out of a couch??) lining the inside and woven into the walls.

And it's woven onto 2 small branches, as if they were knitting needles and the loops still on the needles, as if the birds were in the middle of knitting another round.

An absolutely incredible work of art, by one or 2 little creatures some people might (mistakenly) call dumb. Just goes to show you that after we humans destroy ourselves and the earth, these little creatures will still be around, going about their miraculous business.
Posted by The Equestrian Vagabond at 8:05 AM