A Hoss With No Name

The big black horse came to the Teeters last fall from neighbor Carol with the name Blackie. Ugh. When I was here back in May, I thought I had the perfect better name for him: Hoss. The name came from the orphan Raven, Hoss, that neighbors Linda and Carol raised last year (after he and his siblings fell out of their nest), and who still hangs around here.

He's John's horse. After I left, John changed his name to Cap'n.

"Uh oh," said Carol, "that's not a good idea. He'll start thinking that way." Indeed, Cap'n is now captain of the 7-horse ship here... or he thinks he is. He's actually a step below Rhett, who doesn't flaunt his high seat, but he will put Cap'n in his place if necessary - but Cap'n avoids these showdowns to keep up the appearance of being Bossman. 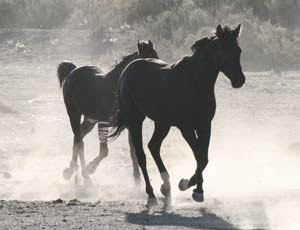 , a boss, and is used to having things his way. If everything you ask him to do is his idea, well, that's great. If you ask him for something that is not his idea, well, he throws little tantrums. On the ground, he gets in your face, he gets in your space, he'll plow you over if you're carrying, say, a handful of alfalfa that he'd like. On his back, he wants to go, he wants to be in front, and he doesn't want to stand still. (He doesn't yet appreciate the Kodak Picture Posing Moments.) He's not at all mean; he just treats you like all the other horses, where he's the boss and naturally always gets his way. Apparently, Carol said, his former owner was intimidated by him.

Connie rode him on an LD at the 5-day ride with Carol and I. I was riding Mac, and Cap'n and Mac seem to have a thing going on. Mac seems to hang out a bit with Cap'n's girlfriend Quickie, and Mac is at the very bottom of the totem pole. Mac would probably rather not be on the same planet as Cap'n, especially riding with him, and Cap'n would rather always be in FRONT of Mac, not behind him, as Connie sometimes asked him to do. We changed his name to Deckhand that day, to take him down a notch or two - to have to prove himself and earn his way up before he could be called Cap'n again.

Cap'n also accidentally gets called Mac. You know how your mom sometimes calls you your sister's name? And calls your sister by your name? For some reason we just get Mac and Cap'n confused a lot. I'm sure Cap'n doesn't appreciate being called the name of the lowest horse on the totem pole - what an insult!

As to his domineering status, inspired by some Clinton Anderson DVDs that Steph and I have been watching, I took Cap'n out to do a little ground work with him. I am no Clinton Anderson, and it didn't go so well at first, because Cap'n knew what was happening - he was being asked to do things that he would rather not do - and he didn't like it. His first responses were just to bull his way past me. We did finally work things out: when I asked him to move - forward, backward, front end or hind end - I expected an immediate respectful response. (He'd obviously learned and been asked to do all this ground work before.) He eventually agreed to this, but it was with such an aggrieved expression it made me chuckle.

Yesterday Connie rode Cap'n for the first time since the ride, and when she started with spurs on, he knew she meant business. She only had to touch him once with them, and he was immediately on his best behavior. In fact, she took the spurs off right away, but again he had SUCH a chagrined expression, I had to laugh again. He's got quite the Personality - he's a Big Black Boss on the outside, but a big soft marshmallow on the inside.

And today, while riding him and Quickie, Connie and I decided all his names just were no good. Blackie, Hoss, Cap'n, Deckhand, Mac - they just weren't working. Cap'n IS John's horse, but John isn't here.

We used to come up with great names for my horses at the racetrack, when I groomed and Connie galloped. We tried on a few new ones for Cap'n during the ride: Truman, Berrick, Saalish (better for a mare), Capote, Winston, Sven... then came Finn - Finneas. The more we used it, the more we liked it. Quickie and Cap'n went out on the ride, and Quickie and Finneas came back to the ranch.

So, John, you'll have another new horse when you get back. 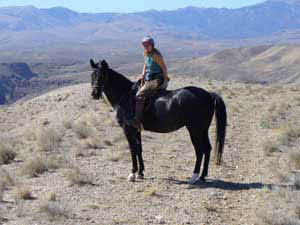 Posted by The Equestrian Vagabond at 8:31 AM