Yesterday’s wind blew in cooler temperatures that felt like autumn, and that made sleeping great (with windows wide open!). It made things a bit easier on the horses too, with daytime temperatures just around 70 and a cool stiff breeze blowing all day.

I got to ride Steph and John’s mare Quicksilver on the 50… only I had to have John throw the saddle on her because I still couldn’t lift my right arm. Of course that wouldn’t interfere with riding! I was sure that riding would be good physical therapy for it.

While looking forward to doing another endurance ride, it was, however, a sad day. This was my first endurance ride without the Raven Λ . I could have carried the new kookaburra along, but it just didn’t seem right putting it into the Raven’s red saddlebag. I just couldn’t bring myself to do it.

It’s hard to choose the best trail of the Owyhee multi-day rides - there’s not one I don’t enjoy. Today’s took us north across the highway to the Snake River again and around Wild Horse Butte. Quickie is a horse with a serious trot, like near a 20 mph trot if she really gets going, says Steph, but now she was rather pleasantly plump, and she had metabolic trouble once before when she went too fast. So we were out to complete an easy 50, something Quickie had some definite opinions about, most of which were that we were traveling too slowly. We joined up with Nance on Jazzbo, and Kara and Chris Yost leaving camp, several minutes after the front runners had left, as it looked like we’d be going about the same pace.

We climbed up out of Pickett Creek canyon 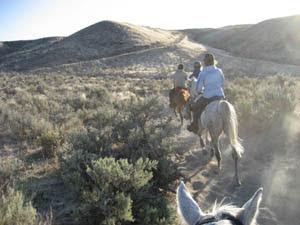 into the sunrise and up onto the flats, into the stiff breeze, hooves churning up fine dust that whipped off to the side. 18 miles away to the north, staying up on the flats, was our first vet check. The wind was still pretty cool, so the hold time was cut from 50 minutes to 40. Frank and Tom Noll came in a few minutes behind our group, and since his riding partner Lynne White wasn’t riding today, he said he’d catch up with us on the next loop.

From the vet check we headed out east and north, over rolling sand hills of scrubby sagebrush and lizards and rabbits, and down into a sandy wash. The wash got deeper and narrower 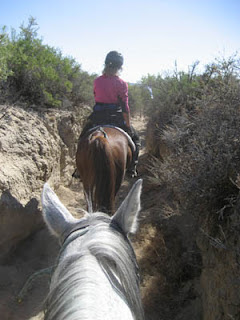 as you followed it, much of it higher than the rider’s head, and some places so narrow you could touch both sides. Sometimes the horses slowed around corners because they weren’t sure what might be lurking ahead! It was one place you wouldn’t want to be taking a nap in the shade during a flash flood, though it sure looks like that may not be anything to worry about this year, as it’s already awfully dry. Frank caught up with us here, and was pulling Tom Noll along as if it was his first day on the trail. Tom had his gloved hands full, and Frank thought (and looked like) he was the wild horse named after the Butte we were headed for.

The further we went, the harder Quickie pulled; I thought it was because we were pointed in the direction of home. When we’d left the vet check, home was to the right, while our trail went off to the left. Quickie was pretty sure we should be turning right. Our trail eventually turned towards home, and I thought when we turned west away from home, she’d quit pulling. Oh no, she just got stronger. All day!

Our group carried on to the Snake River, where the wind was whipping white caps up. Some of the horses were a little spooked by them, but Quickie plunged right in the river, and I had to stop her before she went right up to her belly, because I could see where it dropped off deeply right in front of us. She didn’t want a drink anyway, she wanted to chow down on the thick green grass growing on the bank.

We left the Snake River before it became a deep canyon and wound around Wild Horse Butte, headed back to the vet check, much of it on the old Oregon Trail. I never forget to think about the pioneers back in the 1800’s, when I’m riding along this trail or the Fish Canyon trail in Death Valley. We have nice jeep roads to follow on fast horses, drinking Gatorade and bottled water and snacking on Power Bars (and great real roast beef sandwiches for lunch at the vet check!), while they were struggling along with big wagons and Snake River water to drink and scrawny jackrabbits (if they were lucky) for dinner.

Two years ago right in this area, I saw what were possibly wolf tracks, (a day after which I probably saw a black wolf), and three years ago this was the area where Tom Noll and Sue Hedgecock saw cougar tracks. I kept my eyes peeled today (or closed, if the dust was blowing in them), but I didn’t see any wild cats or canines. We did, however, see a couple of antelope, which bounded away from us as we surprised them coming over a little hill.

Back into the vet check for a 50 minute hold, where Quickie ate everything in sight, including half of Jazzbo’s food. It was an easy 12 miles back home, and back into camp where we raced across the finish line… at a walk. John was snapping pictures but our finish was quite boring compared to the race for first a couple of hours earlier between Mell Hare and Joyce Sousa. That’s one thing I really like about multi-day rides, everybody going their own pace, fast, medium, slow, us slower ones just trotting along, telling stories. On the trail our group said, “I just want to finish all 3 days.” “I just want his heart rate to come down at the vet check!” “I just want to finish today!”. Tom Noll said, “It doesn’t matter if you ride slow or fast or anyway; it doesn’t matter what you’re competing for. There’s winners of the rides, winners of weight divisions, teams winners. If you just ride your own pace the competitive ones sort themselves out. I think it’s just great when you accomplish whatever your goal is.”

Owyhee County is one of the best places on the planet to ride, 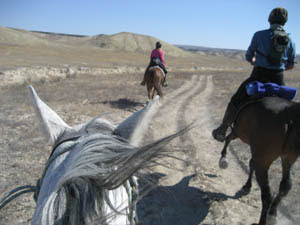 although since I haven’t yet met a place I didn’t like to ride, my high estimation might not hold a great deal of weight. I don’t know what exactly it is, but you just feel good after a ride. Around here we are very lucky to have local landowners who support the endurance rides, including the Joyce Ranch, where we ride along their canals and through Sinker Creek right at their ranch base, and the Sierra del Rio Ranch, where we have a vet check on one or more of the days. They certainly don’t have to let us ride through there, much less host a vet check there, but they’ve done it for years.

24 of 25 horses finished the 50, and all 8 starters finished the Limited Distance. The horses that were treated at the clinic yesterday were doing well. Quickie looked like she’d slimmed down a bit from the ride, (although surely she ate double her weight loss back!) and my arm was feeling much better. Although maybe that was only because the rest of me was pretty stiff and getting sore (hadn’t ridden that far in a while!).

If you don’t make it here to ride in this gorgeous the 5-day Owyhee Canyonlands in September, don’t come crying to me. Of course, I’ll be the one crying if I’m not here for it.
Posted by The Equestrian Vagabond at 8:09 PM