If he’s not The top breeding endurance stallion in the world, Chip Chase Sadaqa (AKA “Wings”) is right up there. He’s 30, and looking quite good for such an old man, and he’s still serving mares. A vet had come to the farm last year or so, and one of the girls asked the vet to watch this horse trot out. “How old do you think he is?” “Oh, I don’t know,” said the vet, “5?” The Tofts have gotten 3 crops out of him since they bought him three years ago, and they really like everything he’s produced for them so far. They’re breeding mostly Anglo mares to him - it’s not a market decision, but just that they prefer to ride horses with a little more scope than Sadaqa, who’s 15 hands. They’ve also been buying Sadaqas around the world that they can find, because they like him and believe in him so much. 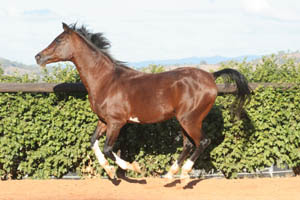 Sadaqa won the Quilty once, was first over the line maybe 3 other times but vetted out - he usually carried a 115 kg rider. Ron Males rode him once to be 2nd. Meg Wade likes Sadaqa too - she has a bunch of them - and he has produced and still is producing winners all over the world - Europe, Ireland, Malaysia, Australia, the Middle East. Pretty much every year he’s gotten top finishers in the Quilty. Brook Sample’s horse Brookleigh Casper that won last weekend’s ride in Imbil is by Sadaqa.

His original owner Pete Cole bred all kinds of mares to him, not select ones, and early on they appeared to be pretty good offspring. Often an endurance stallion becomes great after he’s dead, because after a riding career, he’ll start breeding, and it may not be till his first crop is 10 or 11 before you see if there’s a really great horse or two in there. Then you wait for the next crop or two to see if that was just a fluke. With Sadaqa, it appeared early on that he was throwing good horses. Before Australia had the FEI rides, they did the hour holds with a vet check an pulse check at a half hour (still the same in some rides; you don‘t have to pulse down when you come in, you just have to vet and pulse down at a half-hour after arrival), so, the horses always had plenty of time for their heart rates to come down. Once the vet gate into holds started, where your time didn’t stop till the pulse was down, that really moved the Sadaqas up a notch because they really did have great heart rates and recoveries. Peter likes them because they’re intelligent, very tractable and easy to handle, on the ground and in the vet ring, and, they’ve just proved to be good.

Jaimee cleaned Sadaqa up one day so I could take photos of him. Sadaqa likes Jaimee, and he likes getting her as wet as possible when he gets a bath. You can tell he does it on purpose. After he dried off, she led him out onto the grass, and said, “You want to get on him and have your picture taken?” I laughed, “Yea right!” Jaimee said “No, really! We do that for our Christmas pictures. Peter doesn’t mind.”

I could just picture it. Merri climbs on this famous valuable 30-year-old stallion thinking the joke was real, and he bucks her off, gets loose, tries to jump a fence for a mare, has a heart attack, or something. Or worse, Peter drives up just as I am sitting on his back and he shoots me off the horse.

But apparently Jaimee was serious. We went in the arena, and Sharon followed with my camera. (That way, if he bucked me off, we were in the arena and he wouldn’t get loose.). Jaimee tried to hold him still by his halter and lead rope as I set the mounting block up beside him; I sort of hopped up and flopped on his back, and he really started squirming. Not wanting to stir him up more by hanging over him, but wondering just how I was going to swing my leg over him without making him more fidgety, I figured I’d better just do it. I did a bit awkwardly, and he tried to jump forward, and I started sliding off his back, because he was so slick from Jaimee’s crème rinse. Whee! But I stayed on, and Jaimee tried to get him still for just one picture, but he wasn’t interested - he felt like he was ready to start an 80 km ride at the front of the pack! 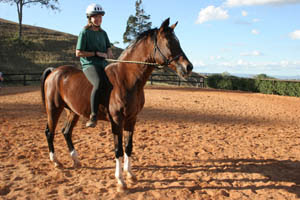 Finally she tied the end of the lead rope back to his halter and handed it to me as reins, and that worked a little better - we finally got a partially still picture with me on the legend Sadaqa’s back. And not wanting to press my luck with him behaving (or have Peter drive up, just in case), I jumped right off him, though boy would it have been fun to canter around the arena on him! (I probably would have fallen off.)

We then turned him loose to run around a bit, and run he did, around and around, and it took 3 of us to corner and catch him, and only because Brooke brought the horse she was holding outside the arena to the gate, to catch his attention. He sure doesn’t act like a 30 year old man - hopefully he’ll be around a good while longer!
Posted by The Equestrian Vagabond at 8:59 PM