I went out with an archaeologist this week for a crash course in some work I’ll be doing next month – it was awesome! This Great Basin area has an enormous plethora of historic and especially prehistoric relics. Anything older than 50 years old is historic (mining, historic trash dumps of cans, pottery, old buildings, etc), and anything older than Indians’ first contact with Europeans is prehistoric, the date of which which varies with the area.

The Humboldt-Toiyabe forest is some 1.2 million acres, and much of the history and prehistory here is unknown and unrecorded. Alice and I came across several areas that would pretty obviously have supported prehistoric peoples, which have never been recorded – maybe never even looked at. It’s the same for most forests, I’m sure – no money to fund people to do this work – which blows my mind. This is our history, our lands – wouldn’t you want to know what we own, what is slowly disappearing and will never be found again? It would be like not knowing who you were or where you came from or who your family was. Imagine not knowing anything about the Civil War and the history and people behind it. This is the same, more history, just a new facet and much much older.

But it’s the same in Greece and Egypt – unknown quantities of ruins lying under dirt and sand that have never been excavated – even when you can see pieces of whole cities sticking out of farmland or sand dunes, they just lay there, untouched.

Anyway, once you start looking for things and you start finding them, the questions start multiplying and quickly overwhelm you. Way out in the boonies one day in an old sand-dune-drifted lake bed in a huge valley, we found, as Alice expected, a prolific lithic scatter. Bazillions of worked pieces of obsidian, most of the almost-clear variety, which we expect comes from a local source of Mt Hicks, some beautiful red and black obsidian, origin unknown, and some ‘chocolate obsidian’, which Alice had never seen before. Which means it must have been traded for – where? When? Who did it? Who lived here? How many years ago? How many people? When did the lake dry up? Right now there is no water, hardly anything but the hardy greasewood bush and some other wicked sticky desert bushes. What was here back then? Were there also springs around? What did they eat? Did they migrate in winter? What happened to them?

If we could find a projectile point, the area could probably be dated, compared with other lithic findings and recordings from the Great Basin. Then, we found a whole one! 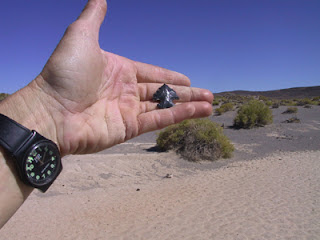 This one, however, did not look like any other known projectile point (Alice had cheat 4-5 sheets, which show the time periods different points were made in). Was it just a re-worked point? A new group of people?

Whoever or whenever it was from, I was holding in my hand an object another human being made with his hands and used 100, or 1000, or 10,000 years ago. I just find that to be astounding. When I was in Greece and Egypt I kept touching things (that said “Do not touch”) that were thousands of years old – I think my record was something from 2600 BC (!!!) – but here, these obsidian flakes could literally be 3 times that old, from ~8000BC…

You can really get into the searching – especially me, since I’m also fixated on the wildlife. My eyes search the ground (and trees) for flakes, burned bones, rock rings, metates, monos, game drives, 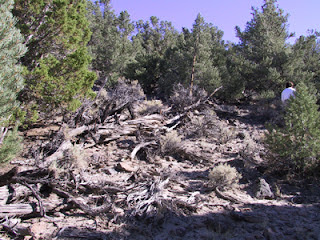 bowstave trees, wickiups – anything not laid down by nature – in addition to keeping an eye out for bird feathers, tracks, animals, ground holes, in addition to watching the sky, (for birds and thunderheads), and the land around me (for cougars watching us). Your eyes are always searching, your mind is always churning with more and more questions. Hours fly by very quickly.

One dry area where we were finding a few flakes, high up in a sloping bowl against the base of this mountain we discovered a mysterious cross-hatch layout of old axe-cut juniper logs – who on earth started something there, this high with no water around - what was it – who-what-why??

In addition to the archy treasures, we saw 3 golden eagles (2 soaring above us, 1 flew alongside our truck), coyotes, way too many jackrabbits, 1 young bear track, 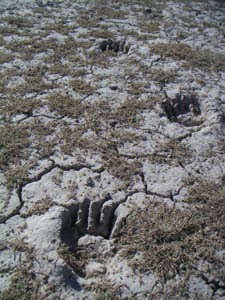 and: a wild horse herd! 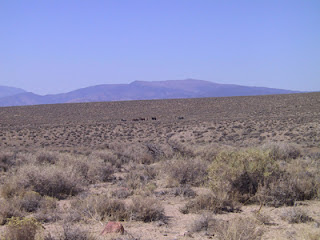 Yep, I could definitely get into this archy stuff…
Posted by The Equestrian Vagabond at 10:05 AM