I went out with the botany girls again today to do a plant survey up on Powell Flat, out in the middle of nowhere, repeating a survey done in 1979, using their old maps. It took us 2 hours to drive there – the last 45 minutes along a very rough and overgrown ‘jeep trail’ (yea, like maybe it was a jeep trail 25 years ago). After we parked, we had about an hour uphill hike ahead of us… but it was more like 2 ½ hours, because we followed the wrong canyon up the first time.

We finally got into the right canyon, and lo and behold, there was the faint trail mentioned from 27 years ago. Only thing was, Amy was feeling a bit sluggish from a week at Burning Man and no food at all to her name but a very sweet huge cinnamon bun, Laura was feeling a bit slow due to asthma, and I was feeling a bit wimpy from a long hike yesterday. So, we puttered along. 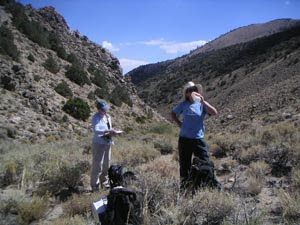 We passed over many bear tracks, and I am sure we were in cougar country, so I kept my eyes peeled up the canyon hillsides and behind us, though we saw no sign of cats. After an uphill hour, we made it up onto the flat. We surprised 2 huge bucks in the distance that took off like a shot, kicking up clouds of dust and never stopped running till they reached Yosemite. We came across many obsidian chips 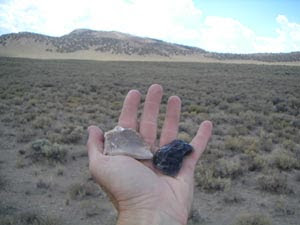 on the flats – a large historic or prehistoric Indian site.

A pleasantly cool day up top at about 9000’, with a few thunderhead-wanna-be clouds to the east, and a few plain ol’ rain clouds to the north. Being paranoid of lightning (for good reason), I watched those clouds closely, to make sure they bore no lightning. But they just dropped rain in the distance and fortunately didn’t turn threatening. And we’d checked the weather – no thunderstorms anywhere in the forecast.

My toe – the one I might’ve broken 7 weeks ago – was aching again; I guess I hiked over its limit yesterday and today. I had to loosen my shoe while I worked.

We worked swiftly through our survey, stopping only when we heard a couple of coyotes yipping and howling not a half-mile away. They were hidden in the sagebrush well – I couldn’t even pick them out with my binoculars, though they must have been right there. It stayed patchy-cloudy, dark rain clouds all around us now, even sprinkling on us a bit. 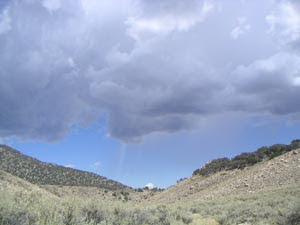 Just as we almost finished, it happened… thunder, out of the blue, right above us. We three looked at each other, startled, since we’d gone all day now with agreeable sprinkles here and there, and with no lightning or thunder. We continued packing up, when, BOOM – another rumble, this one with more serious intent, to our south.

When that happens to me – when I’m outside, exposed with no shelter, and that has happened to me FAR too frequently, that crack of thunder is like a shockwave of adrenaline and fear that cracks inside me. Then it thundered more seriously above and just to the north of us. Oh, shit. Forget the GPS point we wanted to take, just grab our stuff – including the metal stakes and my metal radio and the metal (or maybe it was aluminum) hole digger – and run for that canyon!

I wasn’t as scared as I’ve been in other lightning storms because so far, this one was not as wicked, but, I was still scared, and though I did not sprint for that canyon cleft off the flat, I ran, with Laura and Amy on my heels. We were about 300 yards from it. I always have time to think of things while I’m running scared from lightning. Things such as, man, I really need to get a will made out, and, things will really suck if someone gets struck, because we are at least 2 ½ hours from help. No radio contact, no way out but the way we came, on foot an hour to the car, and at least 1 ½ hrs by road before we might get radio contact.

Then Amy said “Oh, dear, look,” and over our shoulder, just over a ridge about ¾ of a mile away, a funnel of smoke rose up into the air – lightning must have struck something there.

Oh, shit. Giggling nervously, we ran faster! 100 more yards to the mouth of the canyon. We got there and we didn’t stop running until we dropped down in height quite a bit from the flat. Of course, lightning does not always strike the tallest object, but we still felt a little safer down lower.

A half-mile down the canyon, after we’d slowed down to an almost-normal fast walk, and in fact heard no more thunder, I realized I had forgotten about my toe hurting.

Funny what a little motivation will do for sluggishness, asthma, and pain!

Now if you’ll excuse me, I’m going to go work on my will.
Posted by The Equestrian Vagabond at 4:48 PM