Not far from the old historic mining ghost town of Bodie is Potato Peak. Today we trailered the three horses up the rocky Aurora Canyon road, and parked at a 4-wheel drive trail that branched off toward Potato Peak. Starting at 7700’, we started a climb up from the canyon – up and up and up, 2000’, to the saddle right below Potato Peak. Raffiq was raring to go – it was a new trail for him, and he hadn’t been out on yesterday’s hard ride. (Instead, he’d spent that time running around his pen screaming for his two companions for 3 hours, so said an irritated neighbor.) We trotted up through sagebrush covered, aspen sprinkled hills, flushing quail left and right. Old mine claims dotted the hills. The Bridgeport valley and reservoir unfolded out far below us, and the still-snow-capped peaks of the Sierras spread out to the west, at what looked like eye level (some peaks there reach to 12,000’). Moving up one of those distant canyons toward us was… a storm! 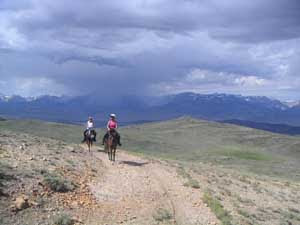 But surely it was too early in the day for thunderstorms! They usually don’t start building until about 2 PM, and we hadn’t had any in the last 7 days – but even so, I kept a slightly anxious eye over my shoulder at the darkening sky. I didn’t worry too much because we didn’t hear thunder – or, rather, the girls didn’t tell me they heard thunder. I can’t hear the low frequencies of rumbling thunder until it’s too late and the storm is just about upon me. Maybe they heard it and just didn’t tell me, knowing how chicken I am of lightning. We were high and exposed, so it’s a place you definitely don’t want to be during a lightning storm, and, in fact, we’ve twice avoided this trail for thunderstorms building at the times we wanted to try it.

Today, though, it was just a rain storm blowing eastward, and it passed just south of us, and all we got was a few sprinkles – we got a few sprinkles, a resultantly cool day, and a marvelous view from the saddle at 9600’ to the west and east. Soaring above us near the top were two golden eagles and a prairie falcon.

We wound our way back down the backside 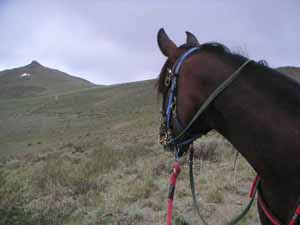 of Potato Peak, into a small valley above the Aurora road, where the horses happily stopped to assist the cows in purging the pasture of some of its rich grass. 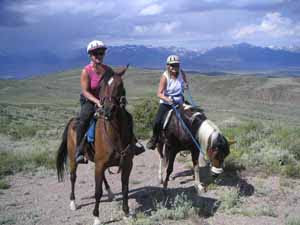 another good climbing training ride for the weekend. Eastern High Sierra Classic, here we come!
Posted by The Equestrian Vagabond at 6:16 PM