Our Forest Service horses are some pretty darn good pack and riding animals – smart, steady, strong, and fairly bomb-proof. In the woods and on mountain trails, anyway - deep streams, downed trees, booming thunderstorms, maneuvering with heavy loads, no problem. What really possessed us to think they might do well in a boisterous Fourth of July parade in downtown Bridgeport, I’m not sure, but, after at least 10 years of faithful service to the Forest Service, why not give them a chance to be seen by cheering fans and an admiring public? Besides, we just discovered Brenda the mule is really 24 years old (!) (and Red Top is 22), so, who more deserving than Brenda, in her twilight years and nearing retirement age, to be in her first parade?

This is how I saw it unfolding: Paiute, my mount, who is often spooky anyway, would be skittish and nervous, and blind-in-one-eye Zak, who I was leading, would be nervous. Cheryl’s own horse Boo would be a goofball. Ingrid’s mount Red Top would be calm. Bob’s mount Tom would be nervous, and the one he’d be leading, Brenda the mule, well, who could predict what she would do? She might tag along, she might be nervous and yank Bob right on out of the saddle, and she might plant her feet and refuse to participate in a human circus of a parade, and that would be that.

We trailered the saddled horses to the far end of town, 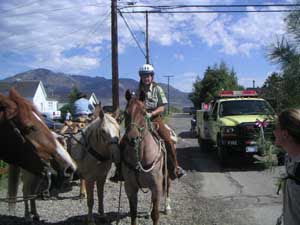 and, with some human nerves a flutter, and a few horses’ nerves a quiver, we mounted up and started across town, on paved back roads, to the beginning of the parade route, where we joined our Forest Service float waiting in line. The horses were all a little wound up, feet clattering on the pavement, legs spinning - Paiute slipped on the slick pavement only once - but there was little traffic, and few people on the back road, and we arrived at our place in line in 20 minutes.

And there we waited. And waited. And waited… Boo was a nutcase, couldn’t stand still for more than 3 minutes. Red Top was perfectly placid; Paiute was a bit tense and wide-eyed though he was able to stand still; Zak was calm enough to close his eyes a few times; Tom was shaking underneath Bob though he stood still, and Brenda dozed off and had Bob give the insides of her big ears a good scratch.

After a good half hour we finally started to move. Uh oh, here we go! Bob took the lead with nervous high-stepping Tom while Brenda tagged along. Paiute’s wide eyes got bigger and bigger as he danced a two-step along the road, and while Zak was a little amped up, the only thing he did was pull hard on me and try to keep his head even with Paiute. I tucked Paiute in behind the calm Red Top and the goofball Boo.

As we turned the corner onto Main Street, oh boy, hang on! Paiute’s eyes were now big as flying saucers in his head, he didn’t know which way to look or which side of the road lined with crowds to be more flustered about. Oh my god, yelling kids here, waving and clapping fans there, oh my, dancing sideways this way and that, getting bouncier the more nervous he got. Zak wasn’t scared, he was still just a little excited at all the commotion (including Paiute’s), and when he put his head in front of Paiute, that really wigged Paiute out, because he got mad at Zak, then nervous at his surroundings, then mad at Zak, and back to nervous – mad, nervous, mad, nervous. People told me later I looked nervous, but I wasn’t at all, because I never felt Paiute would completely lose it. I just had to keep my attention focused on my two horses – keeping Paiute going straight, and sometimes hauling back hard on Zak.

Paiute tried to dance one way then the other, but I was able to keep him going fairly straight compared to Boo, who, to our right, was doing some mighty fine side passing one way then the other, as he were a highly trained Lippizaner at the Spanish Riding School. Cheryl was not asking him to do this, but she kept a grin on her face (or was maybe gritting her teeth?) and kept waving to the crowd, while Ingrid on plodding Red Top was able to wave gracefully like the Mayor of Bridgeport.

Up ahead of us, Bob was also concentrating on keeping nervous Tom calm, and then there was Brenda – Brenda! She was daintily walking along behind Tom, looking left and right, acknowledging her admiring fans by waving her ears, the Queen of the Parade. This parade was all about Brenda!

When the beginning of the parade turned around and doubled back on us, oh boy! Then we had the cheering fans on one side, and, coming at us on the other side, trucks! Floats! Tractors! Little kids wearing fishes around their waists! (Very scary!) A string of 8 pack mules! (Zak nickered at them). And then – oh shit oh dear, miniature horses pulling miniature carts! All of our horses went – WHOA! They all shifted and skittered sideways, bugged-eyes rolling to the tiny alien creatures that resembled horses but surely could not have been. All of our horses except for Brenda – she angled over to the left because, being the Queen of the Parade, she wanted to go greet and socialize with them.

We successfully made it to the end of Main Street – yay! Halfway finished, and no accidents! Then we turned around to parade back. We still had the cheering waving fans on our right, but now, coming at us on the left, were some kind of little pirates, chanting and throwing things and driving little cars, whacking things along the street, popping things – it was too much for Tom. He balked in panic, and Bob spun him and Brenda (who wanted to join the games) and tucked him in behind us. That left crazy Boo in front with the traipsing Red Top, and a wigged out Paiute and a pulling Zak, who I tucked in between the two again. During the whole parade I kept talking to Paiute and Zak, telling them how brave they were, reaching down to pet them both when I could ease up on the reins and lead rope. Zak believed me, but Paiute was pretty convinced he’d gone to hell for the day.

There must have been several hundred people watching this little hometown parade. I heard my name a few times but only looked up twice, because I didn’t want to take my eyes off my two horses. There were too many little kids running around – way too close to the horses – and I was concentrating on keeping Paiute just under panic mode and going in as straight a line as possible, and keeping Zak a head behind him.

Just before we got to the turn off from the main road, here came the CHP and Deputy Sheriffs, and an ambulance, with not only their lights going, but their sirens on. Oh, how convenient! When we got thrown onto the cement and trampled, they could just keep those lights and sirens on, and just throw us in the back, and drive on to the hospital in Carson City! Actually it was the pressing crowds of people at our turn that made our horses the most nervous, and it was the thought of people getting hurt by the horses that made us humans very nervous.

But we made it through, and once off Main Street, the parade over, our horses calmed down considerably. They did it – the first Parade of the Bridgeport Forest Service horses! 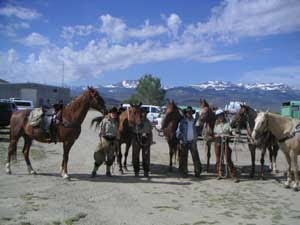 We crowned a new Parade Queen today – Brenda the Mule!
Posted by The Equestrian Vagabond at 1:04 PM