Another Cat Who Went to Heaven (On Earth) 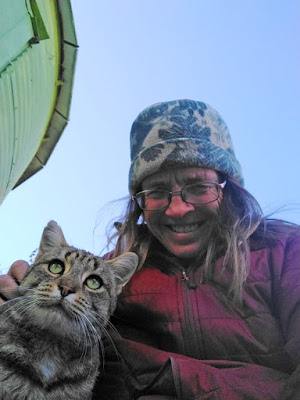 This is a horse blog… but cats are horses too!

Cosmic things are swirling around in the Universe. It’s supplying us with answers we didn’t even know we had questions to.

It starts with Edgar Raven. We’ve been friends with Edgar for over 2 years now, ever since he tried to raise a brood in Connie’s Big Tree. (You can read that ultimately tragic story starting with April 2021 on Forevermore the Raven blog.)

Edgar still shows up most days asking for (well… demanding, really) some food. He’ll first go to Connie’s place and get some treat, then he’ll show up in my tree and holler at me. We’ll give him just about anything - a dead mouse, chicken scraps, egg, cat food, dry or wet.

Connie put an old can of cat food out one day last week, and instead of Edgar eating it, Connie looked out her window and saw a gray cat eating it! Now, we have Oscar Wilde Cat, a badass black cat that roams up and down the crick, but we hadn’t seen this cat around before.

The next day I saw the gray cat trying to drink out of a water trough. Connie went and got some more wet cat food and set it out and the cat was so skinny and starved, it let Connie pet him while he ate.

So, Operation Cat Rescue starts. Connie got him more food and water - he was terribly skinny and dehydrated - and set up a little box with a blanket in the sun. He was happy to snuggle in there warming up, and eating, while we were outside cleaning a storage unit. Then he felt so right at home already that he walked into the storage unit and supervised while we moved boxes and things around.

We decided to lock him in the big pump house at night, with an old cat box with a cover and several blankets, and all the food and water he wanted, mainly to let him rest and keep Oscar from harassing him if he showed up.

And, in honor of a starving cat Barney that was found and rescued at the Lost n’ Lava ride in 2015 and subsequently adopted by Helen, we named him Barnaby. He’s a tom cat, not sure how old.

He loves Connie’s big dog Stoney. He loves to help with things if you’re working outside - no way this was a wild cat. (And really, nobody would drive this far out to dump a cat.) He must have once lived at some ranch with people and dogs because he’s very personable.

And he loves his new home, his private Barnaby’s Pump House, where he’ll snuggle into his many-blanketed bed day or night, and eat up all the food and water we can give him, and show up to visit if anybody walks in that area and calls him. He’s already put on a ton of weight and looks and acts like a regular cat now.

And - possibly even more cosmic, Barnaby showed up here the very same day that my brother’s beloved Bear cat went to Cat Heaven. What does this mean!?!? It means something.

Barnaby is the perfect quiet gentleman now residing at The Flying Cloud Retreat.

He has adopted this place and that’s it. The end. 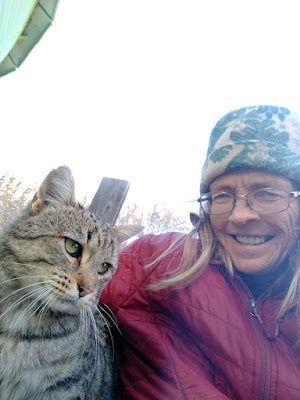 Posted by The Equestrian Vagabond at 1:42 PM