The Kitten Who Went To Heaven (On Earth) 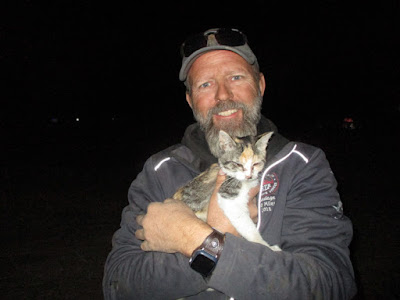 This story is horse-related since it happened at an Endurance ride!

Friday night before I crawl in my bed (car) at Ridecamp at the Autumn Sun Pioneer/Distance Nationals Endurance ride, I am brushing my teeth under the stars, when I hear a “Mew”. Huh? A bobcat? A strange bird? “Mew.”

I turn my headlamp on and swing it around, looking for eyes. No eyes, no more sound. That was weird. Ridecamp is out in the middle of Desert Nowhere.

Next morning get up to my alarm in the cold and dark, crawl out of my bed (car), fumble around to make coffee, say hi to Karen B who’s walking her dog Pickles in the dark, and “Mew.”

“Did you hear that?” We listen, and “Mew.” That has to be a cat! I turn on my headlamp and we walk toward the big flatbed water truck toting a big tank of water that’s being used to fill the water tubs in camp and on the trail. “Mew. Mew.” Whaaaaaat? Definitely a cat. There shouldn’t be a cat out here! Is it in the truck cab? Inside the water tank?? No. We walk around the other side of the truck. “Mew. Mew.” Where is this thing??

I duck below the flatbed and holy crap there’s a tiny kitten on the tire. “Mew. Mew. Mew.” OMG! Instinctively I grab it - it won’t let go of the tire with one claw, because it’s afraid, but it wants to be rescued but it’s hanging on mighty tightly to that rubber. I unhook the claw and cradle her under my chin inside my coat. She’s clawing me because she’s scared but she’s purring like a noisy 350 horsepower generator.

Ooooooh kitty! A rescued kitten! Where on earth did it come from!?

But wait - now what! I didn’t have a plan beyond grabbing it. This is beyond my capacity to deal with. I can’t put it anywhere, it will run away. I can’t leave it in my car. It needs care. And I have to leave shortly to go out on the trail to take photos! What on earth do I do with this tiny thing, now that I impetuously committed to rescuing it!

Of course I walk right up to Dr Mel’s trailer and knock on the door, hoping Mel and Tom are already awake, because Mel will know what to do. She says something from inside the trailer, and at the door I say, “I need help!” The kitten is still clawing me but purring ferociously nonstop. It’s still a bit scared but knows it’s struck the jackpot, and it’s not going anywhere.

And I get an idea, “Karen, Regina has a dog crate in her truck, can you go grab it?”

And of course as soon as Tom opens the door and Mel sees the kitten snuggled under my chin, she goes into crisis care mode. “Oh yea, I’ve got some canned chicken here,” as she’s grabbing cans, “we’ll put some water in this dish here,” as she pulls out and runs water in a little bowl, “and I’ve got some wood chips we can use in a litter box. Yep, her eyes are weepy and she’s a bit emaciated and she’s got a respiratory infection, not uncommon for a stressed kitten. Some food and TLC and antibiotics and she’ll be fine.

Mel opens a can of chicken and sets it on the trailer bumper, and I put the kitten down and that was all she wrote. I don’t even have to hold onto her because she is starving and she isn’t leaving that chicken! Karen brings the dog crate, and we bundle the kitten, can of chicken, water dish, cat potty, and even the soft dog rug into the crate and the kitten never stops eating.

I have to leave so I put the crate in a very conspicuous spot under one of the tents, like right where people will stumble over it or run into it, so that the kitten can see a lot of people throughout the day, and continuously piteously purr and Mew and attract the sympathy of some sucker who might take her home. (Mel can’t take the kitten; she already has too many. I can’t keep a cat; where I live it would get eaten in 1 hour by any number of critters, domestic and wild.)

I worry about that kitten all day while out shooting pictures. When I return to Ridecamp and walk to the tent where the dog crate had been - it’s gone!

I find Mel. “Did somebody take the kitten?”

“Well, I was kind of thinking about getting a cat,” Mike said later, “and you can clearly see SUCKER written on my forehead.”

It took Autumn Sun about the same time it took for her to wolf down a can of chicken (5 minutes) for Mike Cobbley, Jessica Cobbley, the two Hyuge dogs and tiny pipsqueak dog to fall under her spell. She adapted to Mike’s house like she was born there.

Autumn Sun the kitten struck gold at the Autumn Sun ride. I don’t know where on earth the kitten came from, but you can clearly see from her photos that she is wise beyond her months, and she was meant to be where she is now! 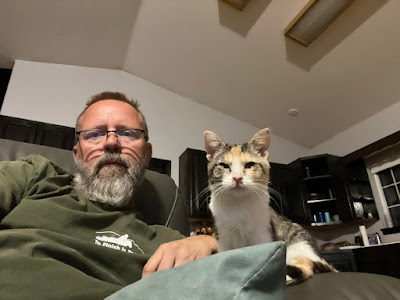 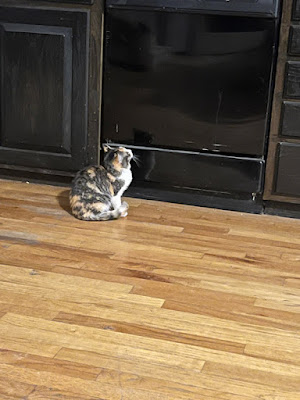 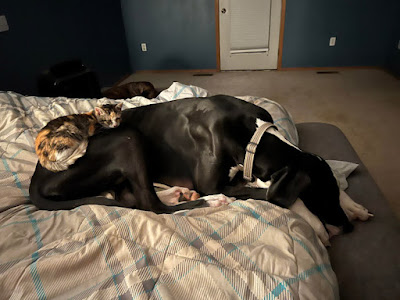 Posted by The Equestrian Vagabond at 1:51 PM