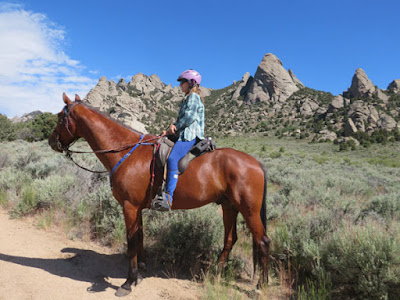 I rode a lit stick of dynamite for 6 miles.

Well, one could hardly blame him for being a hot crackling explosive. City of Rocks was Standardbred Hillbillie Willie’s first endurance ride of the season - his last one was last October.

Rooting his head (and the bit) up and yanking it down and jerking it to the sides… no amount of (exhausting) leg-leg-leg or rein jiggling or one-rein pressure or rein wrestling or pleading got him to stop doing that for the first 6 miles of trail in the 50-mile ride. Giving him a loose rein would have put him 5 minutes ahead of the front runners even though we started 10 minutes late.

It was Day 3 of City of Rocks in Almo, Idaho. Willie did all 3 days last year, but this year just one day was best for him, since he’d been away from endurance so long and wasn’t as fit at this point as last year, and this is a tough ride, and he’d be going hard as usual, and wanting to go faster than I wanted him to. 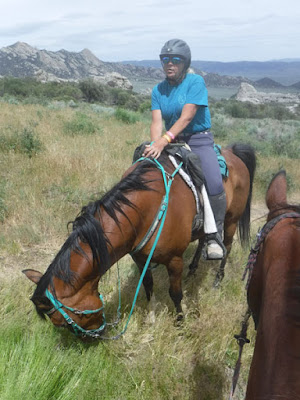 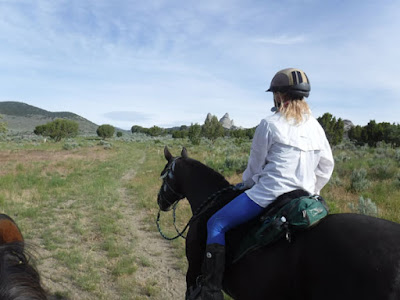 I knew they’d set the perfect pace for and match strides well with Willie, because those two rode Day 1 together. Jack’s always the consummate professional, always calm and steady, a good influence on Young Jedi Willie. Of course, Willie ignored him for the first 6 miles because his former racehorse memories and instincts were in the forefront of his imagination, even though most of the other horses and riders were far out of our sight. Willie plumb wore me out. I could put him in front, in the middle, or in back of our group, and for 6 miles I got yank, pull, root, head toss, mouth open or bit chomp. 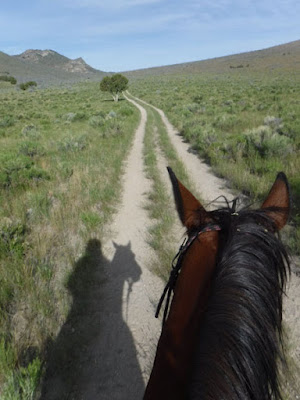 But somewhere near the border of Utah when we turned a corner onto the Boise-Kelton Stage Route, heading for the stage station ruins and the intersection of the California Trail in City of Rocks National Reserve park, 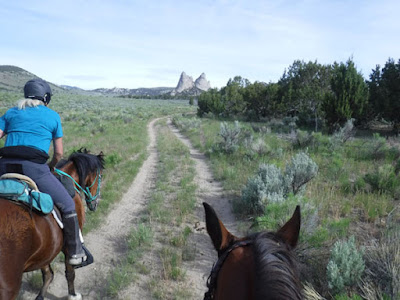 Willie transformed into the endurance horse I know, settled down and moved along at a steady long trot, loose rein, ears forward and relaxed. (Whew!) The three compatriots cruised the two 25-mile loops together through the park, climbing on loop 2 to 7500 feet at Indian Grove. 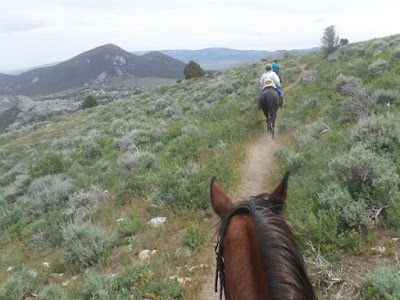 All was smooth sailing… except for the lunch break, when I was waiting to go back out with Deb and Nance, and I tried mounting Willie by stepping up onto an almost-empty water tub… which collapsed into Willie (i.e. attacked him, dousing both of us with the water left in it), and I fell into him (resembling an attacking Ninja warrior) and scared the bejeezus out of him, and he panicked and flew backwards, and I kept holding onto his rein hoping he’d stop and recognize me for the clumsy human I was, but he didn’t, and he kept backing and dragging me face-first in the dirt, and we created a huge dust cloud and attracted a cluster of shocked people, and finally I had to let go, and ouch my kneecaps hurt because that’s what I’d landed on first, and when I plowed to a stop and lifted up my head out of the dirt and looked at Willie, he was 15 feet away from me snorting, head down with HYUGE eyes, wondering, Why did you attack me? Brian picked me up out of the dust and humiliation, then I had to approach and comfort Willie and assure him that it wasn’t intentional and I hadn’t really attacked him! (Oh, I see a cartoon in this.)

And then all was well for the rest of the day… except my kneecaps were bruised and it took two washings afterwards to get the dirt/mud out of my tights. 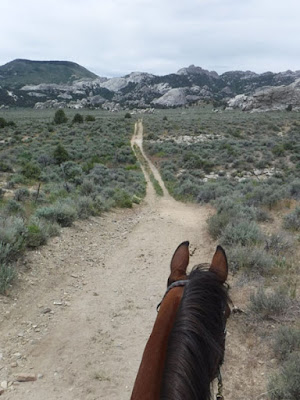 Posted by The Equestrian Vagabond at 10:04 AM