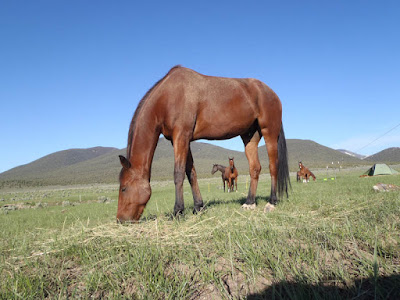 It was Steph who suggested I try riding her horse Hillbillie Willie, the off-the-track Standardbred, in all 3 days of 50's at City of Rocks Pioneer endurance ride on June 6-8 near Almo, Idaho. It's takes place in and around City of Rocks National Reserve and Castle Rocks State Park, and it's the first 'leg' of the Idaho IronHorse 'triple crown', the other 2 being the 3 days of the Top O' The World Pioneer in July near Spencer and the e-day October Autumn Sun near Gooding.

What a great challenge! Willie is only 7; it's only his third year of endurance riding. Could he do three days in a row?

During his first year, he finished 5 out of 6 50-mile rides - his one pull resulted from bruised feet during a ride. That's when we learned that he didn't have real tough feet (is that a Standardbred thing? a racehorse thing? just a Willie thing?) and he needed pads. End of that year he was AERC's high mileage Standardbred, presented by the United States Trotting Association in partnership with the AERC. He also finished 2 back-to-back 50's at the incomparable Moab Pioneer ride at the end of the season.

Willie finished all 3 of his 3 rides last year (one 25, two 50s); this year he'd completed April's Tough Sucker 50 before City of Rocks.

I've spent the last year working on calming and slowing him down, getting him off the bit, collecting, going down the trail with his head lowered and relaxed, and ingraining a steady (not racy) trot. Though I can fake it, I'm always a little nervous at the start of his rides, because I don't want him to get nervous and wound up. It wastes a lot of energy, and it can be rough to ride. At City of Rocks, whether we did 1 or 2 or 3 days, I just wanted him to have calm starts. I wanted one riding partner that could match his big stride and who would be a good mentor, and I hoped he could ride much of it on a loose rein. And I didn't think ahead to doing all 3 days; we just went vet check to vet check. 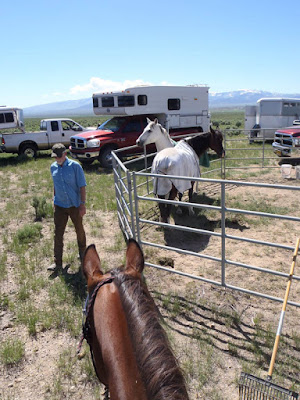 Willie says hi to his pals and mentors, whom we rode with in this year's Tough Sucker: Cousin Hawk (JAC Winterhawk - 2500 miles and 6 BCs) the gray, and Uncle Mal (Fire Mtn Malabar - 7300 miles and 48 BCs) the bay 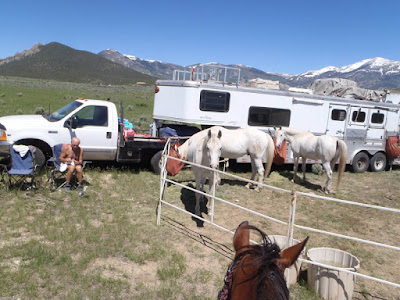 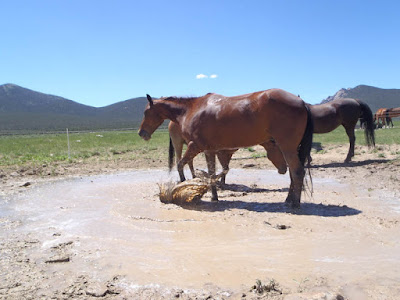 Willie and Jose play in the stinky mud pond, after which I took Willie to vet in and didn't clean him off for Jessica the vet. She loved him anyway. 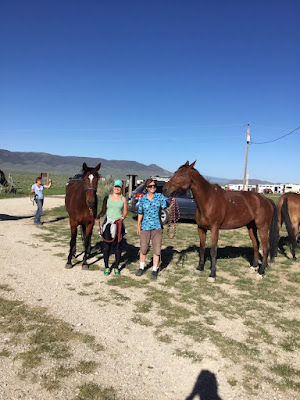 Posted by The Equestrian Vagabond at 8:03 AM