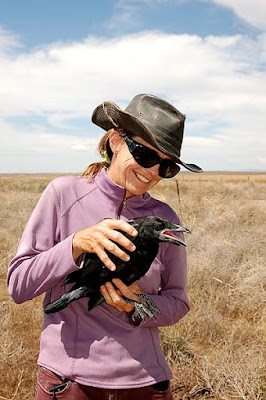 I knew we'd be getting to help band young ferruginous hawks on our field trip (a repeat of the one I did a couple of years ago), but little did I know we'd get to help with juvenile RAVENS also!

It's a local outreach program between the Boise BLM and the Morley Nelson Snake River Birds of Prey National Conservation Area and Raptor Research Center that gives raptor (and RAVEN) enthusiasts like me a chance to go on a field trip with biologists to assist them in banding birds of prey (and RAVENS!!!). 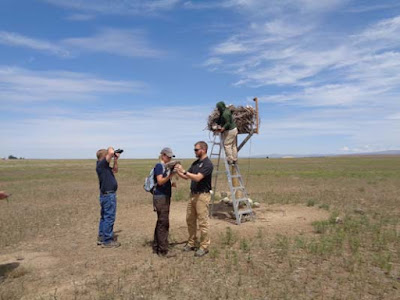 Our first stop was a platform nest with 5 juvenile ferruginous hawks. As the adults circled in consternation high above (they are generally not aggressive), one by one the babies were plucked from their nest, and handed off to the arms of us eager hawk holders, each bird awaiting their turn to be measured and banded. 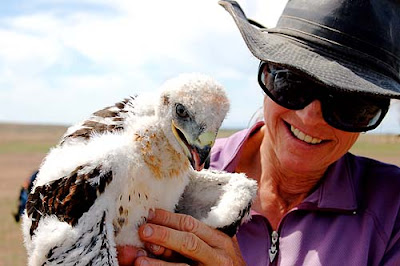 These babies, averaging about 30 days of age, are just about as big as they'll get, but their flight feathers have not fully developed, nor the muscling needed to flap those (one day) powerful wings yet. Nor are they aware of the strength of their toes yet nor the razor sharpness of their talons. In your arms, a ferruginous hawk baby will pretty much do exactly what he does when sitting on the nest: just sit there unafraid and seemingly unworried, not trying to escape. Two of them were even set down on the ground under the truck in the shade to await their banding, and they just sat there and waited patiently. 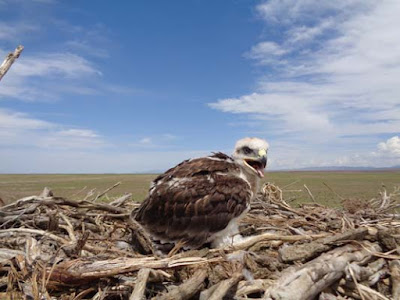 These birds are currently plentiful in the Snake River Birds of Prey Conservation Area, on the flats north of and above the Snake River canyon. Their primary prey is ground squirrels (of which this year there are approximately a billion) and jackrabbits, though they'll also eat insects, lizards and snakes. I told the little one I held that maybe one day he'd be flying above my place in a year or two.

Our plans had been to go to band a second nestful of ferruginous babies, but due to propitious unanticipated circumstances, we instead went to a RAVEN NEST to band 4 juvenile Raven babies!

Oh, my stars. I have held a Raven before, an adult that we crick neighbors rescued from a dog injury, and nursed back to health (and it was probably Hoss, the same crick Raven that Linda raised from a baby when his nest blew down years earlier), but it's still a thrill to hold a RAVEN, any time, anywhere. 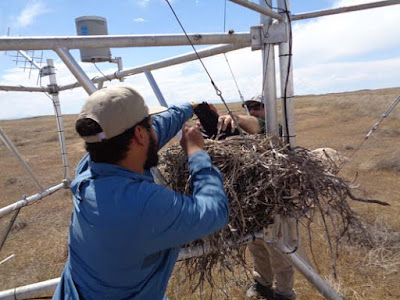 This nest of 4 was conveniently ensconced in the crook of a weather station on the flats (not far from another ferruginous platform nest), and these babies were cranky and nervous and LOUD (and so were the parents shrieking at us flying above) and they *did* know how to use their beaks and very healthy vocal cords and their feet, on the ends of which were some rather sharp talons (though not as dangerous as the hawks'). They could flap their big wings just fine, too, and were probably within a week of fledging, and would then have been uncatchable.

The first Raven I held was a bit smaller and settled down well enough while I held him/her in the shade awaiting his banding.

The second Raven I held was handed to me after banding, and he/she was bigger and really perturbed and insulted and cranky and NOISY, and gripped strongly with his claws and wanted to flap away towards his nest. I named him BRUISER, but I held him firmly in the shade and told him, too, that one day maybe he'd be flying over my place and I'd say hi and he'd remember me.

The opportunity to do something like this really makes you think about the birds. They aren't always just a speck in the sky or a sentence in a news report. They lead a precarious life growing up on a nest in the wild, where it truly is survival of the fittest, from weather, predators, humans.

Conservation efforts you support or don't support can effect their future, for the better or the worse. If you've made the effort to go out and see a wild bird up close and *particularly* if you get to hold it in your arms and feel its heart beat, what happens to them might really matter to you.

And, anyway, it's just a thrill if you love birds. If you've never closely visited or held a wild bird before, I highly recommend it! 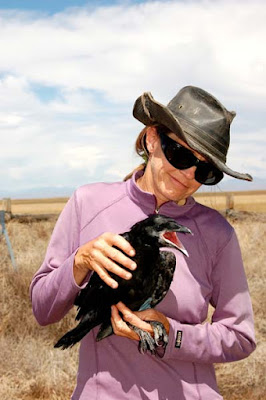 Posted by The Equestrian Vagabond at 6:47 AM