Willie Wants to Be A Bad Boy 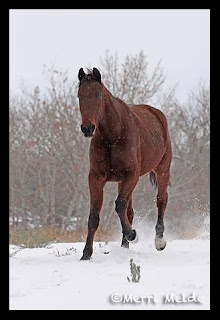 In the mornings, I lead the two Hoodlums - Dudley and Finneas - up the canyon and lock the green gate on them up there. If I don't, those two will hog the hay feeder - Finneas on one side, and Dudley on the other, with the rest of the herd standing around waiting and hoping one of the Bad Boys will get thirsty and leave the feeder to go get a drink, so they can slip in and get a few bites.

Willie the Standardbred has started following me as I lead Dudley and Finneas up to the green gate. He wants to be a Bad Boy with the two Hoodlums. 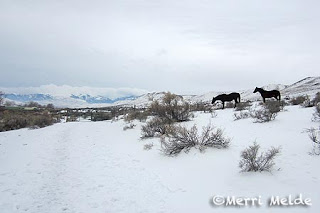 I don't know Willie well enough to know if he can handle being separated from the rest of the herd - I don't want him trying to go through or leap the fence if he decides Dudley and Finneas aren't the best company after all. So, after I lock the two Hoods behind the green gate, with Willie looking on, I start walking back down to the herd. I gesture to Willie, Come on, and he starts ambling back with me, his head right over my shoulder.

As we walk down the little Roll Hill (where everybody likes to roll), I start trotting… Willie starts trotting… and we come around the last sagebrush and I start running, and Willie falls into a pace, then in a split second he's racing past me in a kind of pace-a-lope, sprinting to the herd with his tail waving over his back like an Arabian. He turns his head back to look over his shoulder at me while he's frolicking like a jackrabbit.

I don't know if he'll ever make a real Bad Boy, but he enjoys flirting with danger.

Posted by The Equestrian Vagabond at 8:12 AM