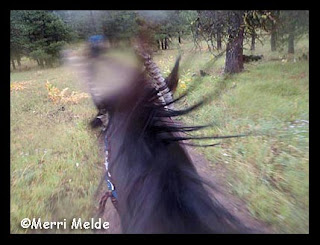 He's a Desert Dude, used to wide open spaces and few trees that monsters can hide behind (only small monsters live behind sagebrush).

Bandit Springs last weekend in Oregon was Dudley's first forest endurance adventure. He went with his pasture mate Smokey and his neighbor August. The best part, of course, was the grassy meadow we camped in. Ohhhh, that rich grass smorgasbord reaching to his kneecaps, that he loved to stuff in his mighty mouth at every opportunity! 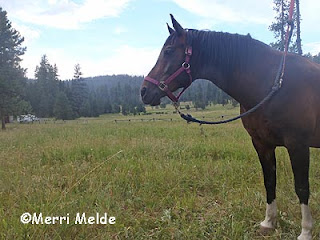 You can see he's scarfed the tall grass in his immediate reach, and he's plotting how to reach the rest

It was Dudley's first time on a high tie, which I was a bit leery of, since we were camped in such a tasty meadow. Middle of the first night, he was pulling and yanking and squeaking and stretching that high tie so hard, he woke us all up, and Steph took the high tie down and I tied him right to the trailer.

My biggest fear for Dudley at that ride was him getting loose, and getting lost in the forest, and me never seeing him again. Horses have gotten lost before. And guess what happened the second middle of the night, right before our Saturday ride. He got loose! Suspicious noises woke Steph and Carol up (they were sleeping in the horse trailer; I was sleeping in Helen's freight liner.) He was on the other side of our trailer, devouring an entire bucket of beet pulp!

Now my second biggest fear, almost as big as the first, is Dudley getting loose from his trailer and getting into every single bucket of grain in Ridecamp. Fortunately, he was easy for Carol to catch, but who wouldn't be, after a big satisfying bucket of beet pulp, from which he was still licking the crumbs? He had pulled his entire halter off his head, but I think it was from scratching and trying to rub behind his ears, because he was very itchy there. Nevertheless, Carol put his halter on tightly, and I gave him a stern lecture, because he scared the crap out of me (and a hug because I was so glad he wasn't lost), and I went to bed praying he would have no ill effects from a bucket of beet pulp. Needless to say, every time he made any kind of noise (banging his hay net against the trailer, sloshing water while drinking, peeing, or farting) I instantly sat up, wide awake, and looked out to see if he was still tied to the trailer. I didn't get any more sleep before my alarm went off at 5 AM. 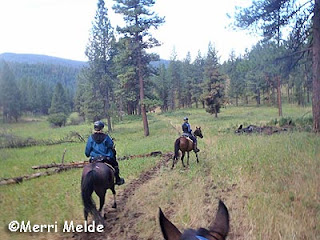 Carol and August led Steph and Smokey, me and Dudley, out onto the trails for the 50 mile ride on Saturday. We had a twenty mile loop back to camp and a vet check, then a 30 mile loop, with an out vet check. The previous day we'd gone out on the 10-mile loop for exercise and to get used to the scary forest monsters, like fallen monster trees, scary tree stumps, and a herd of over 50 elk whose bugling squeaking trumpeting calls so alarmed our horses that we all jumped off before they ejected us. The elk herd seemed to want to make our acquaintance, and I left the horses, screened behind trees, and ran out to scare steer the herd away from us. Yes, a person on foot can turn away an entire elk herd that's bearing down on you!

On ride day, our horses weren't scared o' no stinkin' tree stumps or monsters. Or elk, which was fine with all of us, because they might have still been a bit alarming. The horses know the difference between deer or antelope, which they know, and elk, which they do not!

Dudley's other favorite part of the forest ride was the two wild turkey feathers he found, that he had me stick in his bridle. (Dudley always finds things: feathers, neat rocks, deer antlers.). 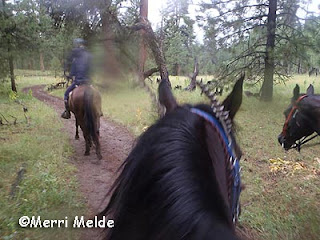 And his other favorite part of the ride was the vet checks where horses had a treat of oat soup waiting for them! 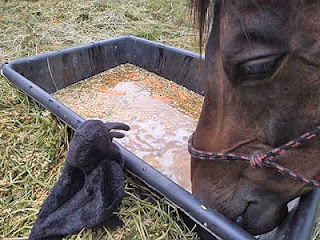 The other best part of the forest ride was the cool weather and the rain. Everybody I talked to only knew Bandit Springs as hot and dusty. We got lucky this year, the 25th anniversary of Bandit Springs. It was so pleasantly cool in the morning, in the 60's to 70's, and in the afternoon, scary-looking thunderheads built above us and finally blanketed the sky with heavy dark clouds. After the vet check, a delicious rainstorm, with no lightning!, soaked us and turned the trails to slick-snot mud, as we plodded through the dark forest, the pine and fir trees beating with dripping water. My other favorite part of the ride, besides the forest trails, the Ochoco Mountains, riding a big handsome beast, and the rainstorm, was the lovely trill of the hermit thrush which serenaded us all day long. 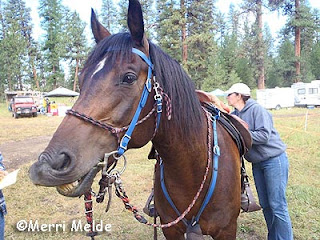 Always mugging for the camera!

Our horses walked the entire last 12 miles or so, because the mud was so slick. But we finished before the cut-off time, and our horses looked and felt absolutely great afterwards. The six Pickett Crick Musketeers did it again! 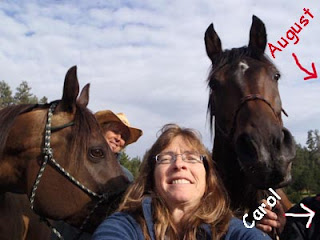 oops, not quite a wide-enough angle lens!

And the other best part of the ride was the 25th anniversary handmade ride award necklaces and key chains made with jasper and quartz rocks hand picked by ride manager Janelle and her son Spencer from Doyle Spring on the trail. The Raven had a hard time picking his favorite one. 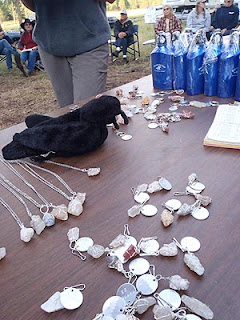 And the best best part is, Dudley's not just a desert horse anymore. Now he's a Forest Dude! 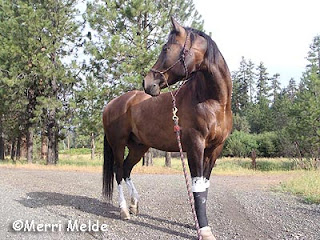 More stories and pictures from the 25th anniversary of the Bandit Springs ride here!
http://www.endurance.net/international/USA/2015BanditSprings/