A Poke in the Eye 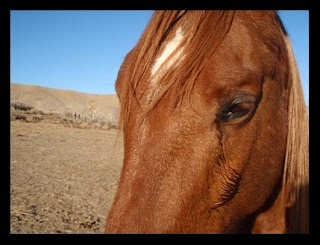 I went out to catch and saddle Kazam yesterday, but I found him with tears running out one eye; he could barely keep it open on the sunny side. He'd poked it with something - probably a sharp hay stick, seeing how the horses bury their heads into the big hay bales up to their withers. I couldn't find anything in his eye, but it was continuously tearing, and he preferred to keep it barely open, or closed altogether.

I decided not to ride a one-eyed green, spooky, bolty, insecure horse, so we scrapped the riding for the day.

This morning his eye was back to normal - so we went out for a ride. I've been holding my breath, afraid to put it in words that he is improving, but I can say it out loud now, even with a day off between rides.

While there's no call to let my guard down any time soon, and he's still got a long way to go, he is getting better, little by little - the Hamster is mentally growing up. He's not so reluctant to go out, and he's getting a darn good walk on him. He's relaxing sooner, and when he looks around, it's now more curiosity than fear. He trots and canters and slows down with just a slight squeeze of the legs. When he bolts, now it's more of a goose in the butt, not a real bolt. He rarely tries to jig on the way back. And he's now a one-handed gate horse - I can hold the reins in one hand and open and close gates, never letting go of the gate with my other hand. And he knows when he's a good boy. I'm not thinking "Tevis Horse!" yet, but if he keeps it up, he might become a nice little riding horse.

So what's better than a poke in the eye with a sharp stick? Getting to ride Kazam... and having a pretty darn good ride. 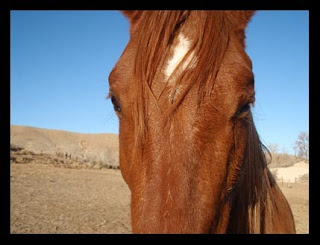 Posted by The Equestrian Vagabond at 3:06 PM