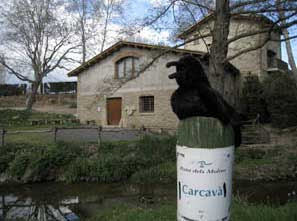 Here's a bit of travel advice.

If you do decide to do all of these things, the good thing is, you will probably forget about the sore spider bite arm, and the antibiotics you're taking, because your sore tetanus shot arm will keep you from sleeping at all the night before your flights, and during your flights; and it will make you want to shoot yourself. (Don't forget, your sore arm(s) have to somehow lift and carry your carry-on bags.) I was really hoping I wouldn't see anyone I knew who would come up and pop me on the arm and say it was great to see me.

That advice came out kind of whiny, didn't it?

However, a bit of humor brightened things up in New York's JFK airport. It's a grungy and dark and dreary airport, with lots of character, the rudest people ever, no free internet, no internet, and David Cassidy songs for Musak whether you want them or not.

PLUS they have Dr Pepper, and the whole experience cheers you up and makes you glad you're an Owhyee'n.

Now the Raven and I are in back in Catalonia, Spain, finally settled into El Moli, outside a little village outside of Vic (an hour from Barcelona), the 16th century mill-turned-house/office owned by Kiwi friends Paul and Madonna. I took a walk into the nearest village to get my circulation going again, and to pick up some freshly baked bread, like all the other villagers were doing.

My arms are better, the weather is nice and cool, and for heavens sake I'm staying in a 16th century mill (with the Raven)! Nothing to whine about there.

This weekend: the 120 km Cron Raid - the Catalon Championships.
Posted by The Equestrian Vagabond at 11:10 AM