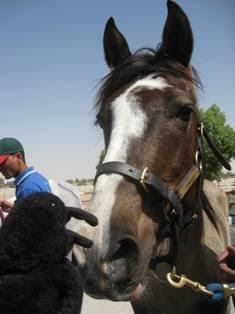 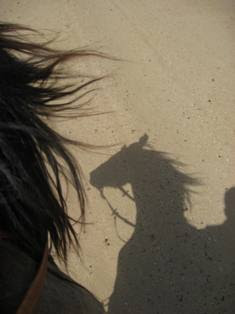 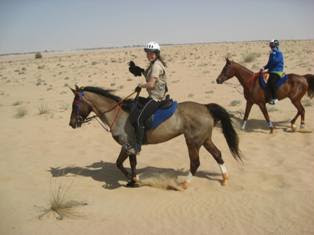 When you leave the property of Madiya's stables outside of Dubai, if you head straight south, you'll eventually end up in Oman or Saudi Arabia.

That's what we did yesterday, headed south into the Arabian Sands (I've been reading this book by Wilfred Thesiger while I'm here), although we only went out for a 3 hour ride.

The Raven and I rode Laila, with Madiya on Opie, and Ali Khan on the gorgeous stallion Solid. 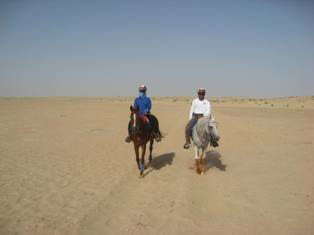 It was just an easy walk - although you couldn't say that walking in this sand is easy. Most of it is a fine-grained soft sand that feet sink down in, but Laila seemed to glide over it as if she had snowshoes on, or as if she had padded camel's feet. The desert here is like a magnet to me - I see the horizon and I want to go there, and I see the next low row of sand hills and I want to go there. All those mysterious names and places out there just waiting to be visited, seen with my own eyes, inhaled and felt with my own being. It MUST have something to do with Thesiger's book - if I were really travelling through the desert on horseback or camelback or on foot, I'd be complaining as soon as the temperature hit 80*, and it was very close to that today.

Nevertheless, it is a fascinating place. Here there is a fair amount of tough scrub grasses (Opie liked to eat them), and which must be plenty of sustenance for camels, because we saw a sizeable herd out grazing. 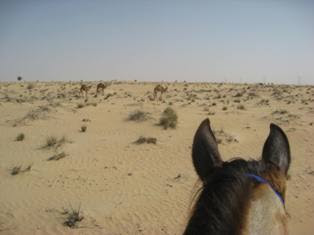 Eventually we saw a man sitting in the slim shade of one of the rare trees out here; he was their herder. The camels apparently don't wander too far and don't run away.

Besides the unmistakeable padded tracks of the camel, 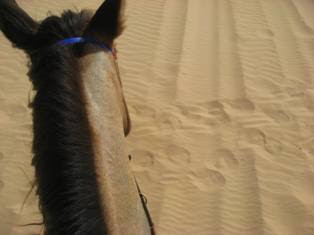 there were plenty of other mysterious tracks under our feet, which indicate this is a very populated desert. I saw one thing - which must have been a mouse - zip to and dive into a little hole, but it was so fast I didn't see what it actually was. A few times something tiny buried itself in the sand as we approached it. We did see a herd of 2 dozen little deer, 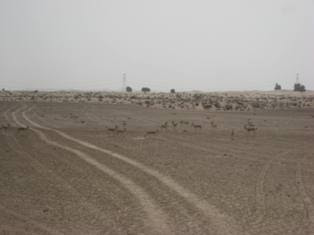 and I saw 3 tiny lizards. On the way back we saw two of the larger 18 inch lizards that hole up underground. One used to could hunt them but now they are protected, and people leave hay by their holes.

After an hour and a half, we turned back from the horizon, and headed back to the stables.

Maybe in another life (in one where I don't melt in the heat) I'll come back to cross the Arabian Sands. 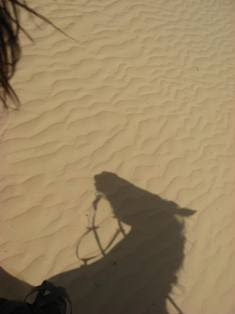 Posted by The Equestrian Vagabond at 7:52 PM