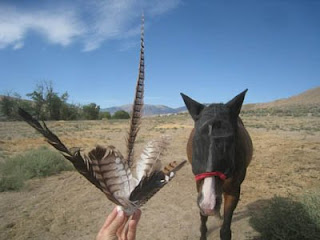 I'd thought birds molted their feathers more in the spring, but that's not true for most species. The spring is when they need their energy for breeding, nesting, and raising babies. It would make more sense to conserve the extra energy involved in molting till the late summer and fall, when those hard chores are done.

Which is probably why I've had a good feather week: red-tailed hawk (found by Jose), long-eared owl, magpie wing and tail feathers, ring-necked pheasant (! - I thought it was a snake at first and I jumped away from it), kestrel tail and wing feathers (wing feather found by Quickie), nighthawk (found by Steph). Treasures!

Karen S and Gil hauled over to ride the other day with me and Jose, 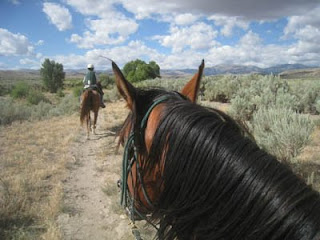 and she clued me in on the mostly late summer-fall molting. And as is the karmic bird wont of Bird Biologist Karen when she comes here, we saw a pair of eagles. I don't think we've ever NOT seen eagles when she comes.

I also gave the dogs the slip the other day and hiked up the creek to visit the long-eared owl roost. Without all the general chaos of 4 heavily panting mouths and 16 feet crashing through brush - just me creeping slowly and quietly along - I spotted one of the owls hiding deep in a shady, cool cottonwood. 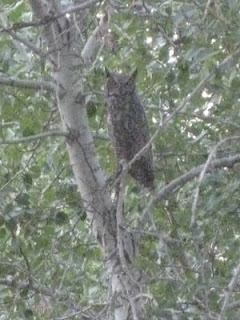 There were probably more (I've flushed at least 4 before), but I just sat and watched this one for a while, and he watched me, not looking too concerned.

Then I said thanks to my lucky owl stars and slipped away, leaving him in peace, picking up a little long-eared owl feather on the way out.
Posted by The Equestrian Vagabond at 8:31 PM