Today's ride took 29 50-milers and 15 30-milers down to and through Sinker Creek Canyon, a rich, biodiverse, flowing creek framed by rugged red cliffs and lined with willows and cottonwoods. Our limited distance trail took us up onto the plateau above Bates Creek, and cross-country to Sinker Creek. 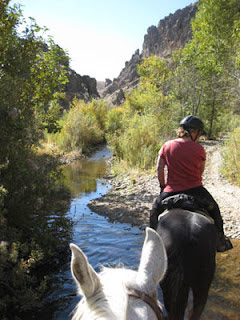 The 50-milers did this loop and another loop up on the plateau toward the north.

I was riding Rushcreek Mac, 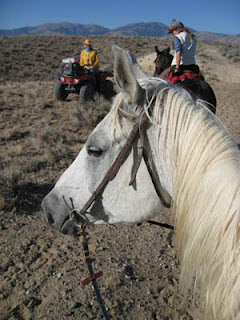 Steph's newish horse from the Rushcreek Ranch, on his first LD ride; Connie was riding Cap'n, John's big black brute on his first LD, and Carol joined us on her horse August on his first LD. We were drag riders again, assigned to close gates behind the last riders, although it ended up that everybody had to open and shut gates, since cows and semi-wild ranch horses were out and about.

We three aimed to start out only a half hour behind everybody, but that turned into 45 minutes because Connie and I just couldn't seem to get organized this morning - our crew bag disappeared, bridle angst, etc. We'd warned Carol that she might have a 'special' experience riding with us today, but she insisted she wanted to.

It was another beautiful fall day in the high desert, temperatures mild in the 70's, and blue skies and sunshine. We met some of the 50-milers coming back into their vet check off their first loop, some of them having been victims of Trail Gremlins, which caused a few of them to miss a few turns. Try as hard as we could, Connie and Carol and I were unable to get lost, but that was probably because we were going so slow.

In the canyon, we wound back and forth through the rocky creek, winding through the willows and ducking under some real low branches. I couldn't help but think of tall Max Merlich on his tall mule Junior as I threw myself flat over Mac's neck a few times to avoid getting scraped off my horse. Or, was it Mac trying to scrape me off on purpose? He did seem to like walking straight through some of the lowest branches of willows. He also liked eating them - he plucked up a whole willow tree 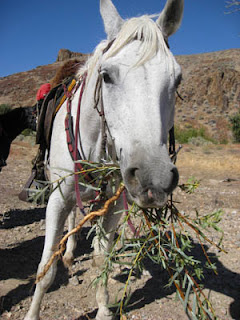 and carried it along for a while until I stopped to pull it out of his mouth. On the trail we met some real Idaho cowboys and cowgirls and cowdogs looking for stray cattle.

Rushcreek Mac has been here since the spring, but he hasn't quite fit in with Steph's horse herd - he's a bit of a loner. I think he misses Nebraska, and the cows he worked with for 6 or 7 years. Every time we go out for a training ride, he's probably thinking we're finally going out to round up the cows... but we never see any. I did see one lone calf above the creek, hiding out from the ranchers, up a side canyon, behind a rock outcropping. Mac didn't see him, or he might've taken cow matters into his own hands.

Mac was a dream to ride, and so was August for Carol. Carol was actually sad she rode him, because now she likes him too much to sell him. Cap'n, however, was not a dream to ride. He likes to be the boss, everywhere, and in everything. Connie did well with him, and he did pretty well for his first endurance ride, but we demoted him from Cap'n to Deckhand till he is taken down a few notches and relinquishes his desire to be the boss.

Nevertheless, we all had a great ride. 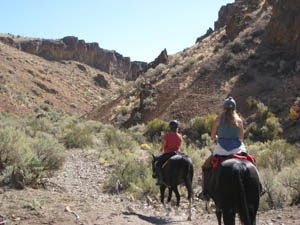 We decided, as we raced home the last 100 yards for the finish (at a trot), who was going to be the Turtle. Carol really wanted it, so we let her come in last (we saw a coyote right behind Carol as we made the last turn for home). But, Carol's horse pulsed down first, so, it was a race between Connie and me for Turtle! But Connie didn't want to be the Turtle again! The pulse taker went between Mac and Deckhand, and Mac was down first - Connie was again the Turtle! (And she got a cool award again for it.)

27 50-milers completed, and all 15 starters on the LD completed.
Posted by The Equestrian Vagabond at 10:58 AM