I think my horse at one point must have lived through one of the World Wars and was on food rations, or he heard of some horse who was, because all he does is stuff his face with a vengeance. I believe he is afraid he might go short of food again one day so he’s making up for that very slight possibility. And he is fat, oh lordy, is he fat. He looks pregnant. 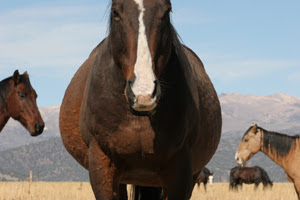 Maybe he thinks he should be eating for two.

When, once or twice a week or so I walk out into the big dude ranch pasture to see him, he can’t always pause long from his eating to let me pet him, although today he was quite happy to see me. He actually stopped eating to watch me walk up, 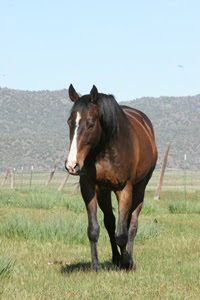 and he paused, oh, like 30 seconds before he had to go back to stuffing his face, and, he even stopped eating a few times for more smooches.

He’s a very jealous sort, that Stormy. When he’s not so obsessively hung up on eating, he gets very possessive, can’t stand to have other horses close to us. Today a nice friendly paint horse wanted to meet me, so he started walking up to investigate. Stormy’s ears flattened against his neck and he charged the paint horse. Now, a timid horse would wheel and flee in fright at this big handsome thoroughbred charging him ready to kill, but this paint was no timid horse. (Most of them are not; Stormy just thinks he’s top horse on the totem pole – he never gets it, no matter how many times he gets bitten or kicked.) The paint just slowed his steps and looked curiously at Stormy, while Stormy was the one who had to stop short. Stormy saved face by keeping his ears pinned, and when the paint didn’t pin his ears at Stormy, Stormy was able to walk away, like, “Huh! Scared you! Kept you away from my mom!” Stormy went back to grazing and pretended he didn’t see the paint come up to me for a pet.

Covetousness flaring again, Stormy tried it two more times when he deemed the painted interloper to be too close to us. I think he did it because he felt safe that the paint wasn’t actually going to beat the shit out of him. Again, both times the paint just looked at him, didn’t even bother to pin his ears back to show who was boss, didn’t squeal at Stormy when they bent heads and touched noses, but it let Stormy again think that he’d protected me and kept me to himself.

He only shows off like this when I’m around. I don’t let on to him that I know who’s boss in the Hunewill pastures and who’s not.

By the way, in the 4 miles of pastures between the Hunewill Ranch and Bridgeport, without even looking, I saw 10 hawks, 1 golden eagle, and 2 ravens. Happy Bird-day!
Posted by The Equestrian Vagabond at 9:45 AM